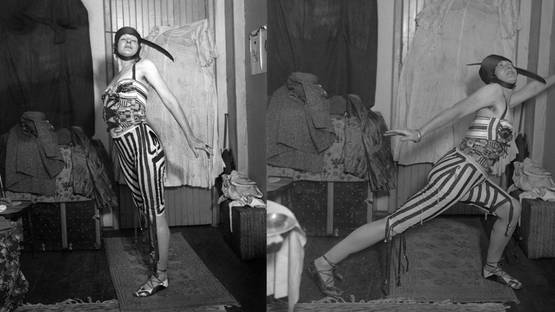 The forgotten mama of Dada, the eccentric poet, sculpture and performance artist Baroness Elsa von Freytag-Loringhoven was for sure one of the most important feminists and avant-garde artists of the early 20th century. Known as the pioneering female artist who changed the position of women in the art world, but also might have been the original author of the Duchamp's famous ready-made The Fountain, the Baroness was neglected by the official art history for an entire century. Just in the beginning of the 21st century did Irene Gammel write a first cultural biography of the Baroness, and her poems were published only in 2011 in the book Body Sweats: The Uncensored Writings of Elsa von Freytag-Loringhoven.

An Art Object Becomes the Artist

The famous Philadelphia-based modernist painter George Biddle hired female models in his studio, just like the majority of male artists of the time. He required his models to be nude and still, in order to serve as inspiration for his creations. During this period, Elsa von Freytag-Loringhoven lived in poverty and had to work as a model, but a very radical, unique and eccentric one. It all stayed pretty much the same until a day in March, 1917, a crucial point which completely changed the roles between the artist and the object, the man and the woman. George Biddle hired her and told her to take off her clothes in his studio. But what he didn't know is that by asking her to do this she will completely change both his and her position in the studio, as well as a long history of the female body perceived just as an object of desire or inspiration.

The Baroness opened her raincoat, revealing that her body was not nude underneath, but rather covered in trash and items she collected in the streets. She wore a bra made out of tomato cans attached to a green string, her necklace was made out of a bird cage containing a canary inside, her arms were covered with a curtain of rings stolen from a local store, and her hat was made out of vegetables. In this moment, she proudly stated how now she became the artist and George Biddle was simply her audience. This was a crucial moment not just for the liberation of women after centuries of their bodies being seen as objects, but for the entire Dada art history which finally connected art and life in one, deinstitutionalizing it and making it use the body as a medium and the found objects as main artistic materials. But exactly because of the immaterial aspect of this performance act and the fact that we can only rely on the description of it provided in the diary of the Baroness, it never became a part of the official art-historical narrative.

Cruising the streets of New York and living in extreme poverty, Elsa von Freytag-Loringhoven collected materials directly from the streets or trash and declared that they are sculptures and works of art already in 1913. She often gave them spiritual or religious names and enveloped them with seemingly impossible meanings. Her first sculpture from 1913 was a stolen rusted ring called Enduring Ornament, followed by a piece of wood titled Cathedral and a God made out of a cast-iron plumber's trap attached to a wooden box. But, besides making sculptures out of these found objects, she also used them to cover her body by placing spoons on her ears, using posting stamps as makeup or wearing cakes on top of her head, which made her every appearance in the streets into an act of public performance.

During the beginning of the 20th century when women were still deprived of a right to dress in a way they wanted and while they still had to follow the accepted social code, the Baroness pioneered with her eccentric looks which sometimes even got her arrested. She would shave her head, go out completely naked, wear black lipstick, walk around with a rat in her hands and steal items from local stores. In this way, every time she went out of her apartment, she was actually connecting art and life in such an effective manner, which made her become the first New York Dada artist and the most avant-garde feminist of the early 20th century. Even Duchamp said that Elsa von Freytag-Loringhoven was not a futurist, but she was the future itself. [1]

Did The Fountain Actually Belong to Elsa von Freytag-Loringhoven?

It is known that Duchamp was a source of inspiration for the Baroness who became obsessed with his character, fell in love with him, wrote poems about their relationship and his rejection of her sexual desires, and even made a performance act in which she rubbed an article about his famous painting Nude Descending a Staircase all over her body in order to connect to the pictorial representation of the nude. She often sent him various art objects as presents, recited poetry about her love saying Marcel, Marcel, I love you like Hell, Marcel.

An important historical trace which might change the way we perceive the famous ready-made The Fountain exists in a letter that Duchamp sent to his sister Suzanne in April 1917 where he wrote that One of my female friends who had adopted the pseudonym Richard Mutt sent me a porcelain urinal as a sculpture; since there was nothing indecent about it, there was no reason to reject it. If we take into account the existing friendship and connection between him and the Baroness and the fact that the urinal was actually signed R. Mutt, we could easily conclude that she was the friend he mentions in the letter. Also, the writing R. Mutt in German language suggests armut, meaning poverty or, in the context of the exhibition, intellectual poverty. It is therefore possible that this entire work might have been a joke sent by the Baroness to Duchamp, a joke which he used as an application to the Society of Independent Artists, New York, making him world-famous and making this piece an iconic Dada representative.

The Fountain might actually be a work by The Baroness, later made famous by Marcel Duchamp

Life and Art – A Pioneering Feminist

Elsa has definitely broke social norms in her artistic acts, but she also did the same in the field of her private life, which we cannot actually disconnect from her art. Her character was one of the most representative ideals of Dada, the pure embodiment of anarchy. Already in her life before New York, while she worked as a model in Berlin, she went through a phase of sexual experimentation which even left hospitalized with syphilis. After her marriage to the Baron Leopold von Freytag-Loringhoven, she only took his title as a part of her artistic identity and left him in order to have more sexual and romantic connections. She became a lover of many important artists of that period and proposed the progressive ideas of polyamory, not understood by the masses who constantly judged her for her lifestyle, nor by her partners who remained desperate and broken. [2]

Neglected in The Official Art History

Only a century after these progressive works by Elsa von Freytag-Loringhoven, art historians become interested in her artistic significance and presence. We could state that it is probably connected to the fact that her entire life was an art-piece in an era when this was not recognized as an art form, during an era in which performance art still didn't exist officially nor was public space considered as a legit platform for artistic experiments. On the other side, we could also see her female identity as an issue within the mainstream art history that leaves female artists outside of the major discussions, especially with such a controversial background story which might question the author of one of the most important artworks that shook the entire 20th-century foundations, The Fountain. In any case, it is finally time to fully appreciate and discover the works of this avant-garde feminist and artist whose production span is probably larger than what we know of today.

Featured image: Baroness Elsa von Freytag-Loringhoven in a Costume, Courtesy of Wikipedia. All images used for illustrative purposes only.