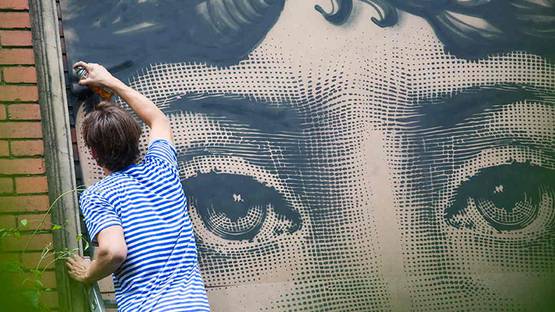 Emess is a German artist, whom many consider one of the superstars of urban art. His work is most often driven by political questions. His work tries to confront the burning issues that people would rather ignore and sweep under the rug – issues that perhaps have no clear and obvious solutions, but that need to be tackled nonetheless. The use of humor and his sense of aesthetics catch the viewer off guard for a moment allowing attention to be drawn to the subject.

Born in 1971 in West-Germany, Emess earned his degree at Fine Arts (Universität der Künste) Berlin.  Emess sees no difference between the street or the gallery space, his work is designed to reach an audience and adapts itself to the situation. His range of media goes from sculptural objects or large scale murals to woodcuts and delicate prints.

In his latest print series, Emess borrows portraits of known personalities of customary bank notes and puts them in a new context to each other and to itself by a very poppy over-layering of silkscreen and stencil. Thus are confronted Che Guevara and JFK as well as Nelson Mandela and Muhammar Gaddhafi. One starts to realize how easily the line between rebel and dictator, between statesman and terrorist can be shifted, and above all how much this perception is depending on the respective cultural point of view and the actual political situation. In this serigrafie which encloses a total of 14 portraits and 108 unique prints the inscription "German workers!" takes relation on the xenophobic propaganda of the Nazis. This happens in accordance to the political posters by Klaus Staek and as a central theme picks out the change of national identity by a stronger and stronger globalizing job market.

Emess currently lives in Berlin, and works all over Germany.