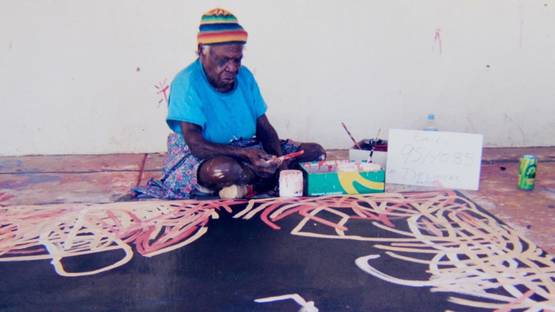 Pure, untainted intuition, without any contact with any kind of art whatsoever. Unaffected by different eras, different styles, different masters. Solely listening to your gut and instincts, almost giving up free will, so the complete primal could be achieved. Emily Kame Kngwarreye was an Aboriginal artist who always relied on her gut feeling when creating, and she is an example that it isn’t absolutely necessary for an artist to have had some of previous connection to the world of art. When we say she painted solely on intuition, we mean to emphasize the pureness of that intuition. The closest things to the artistic influences she has ever come in contact with were the customs and traditions of her people, the Aborigines.

One of the Best

She painted only for a short period of time, but during it, Kngwarreye had managed to achieve the level of fame a few artists have ever reached. Her first canvas, titled Emu Woman, made between 1988 and 1989, attracted wide attention, and it wasn’t long before she became one of the most famous Aboriginal artists, but also one of the most recognizable Australian artists, whose pieces were high in demand. It all started with batik work, which is a technique that uses wax in the process of applying the paint to the cloth. The technique required for batik is simply unforgiving, where each mark of the canting is recorded, layer after the layer, and nothing is obliterated. There is no room for error, and that was the approach she used when she painted.

Nothing was ever obliterated from her paintings

A Force of Creativity

She began working in batik around 1978 and moved on to painting around 1988, pursuing it until her death. It is unbelievable how someone can start to paint when almost 80 years old, and yet managed to get compared to the legends such as Jackson Pollock, Mark Rothko, and Willem de Kooning. Not just compared to them in a meaning they were equal, some art scholars even claimed she was simply better. Sadly, she only painted for about 8 years, but still managed to create a lot of paintings during that period, which makes her one of the most creative artists who ever lived. The artworks were the response to the land of her birth, to its landscapes, circles of seasons, sweeping rains and flooding waters, seeds and plants, but also the places of spiritual energy.

The paintings were her response to the land of her birth, its landscapes, circles of seasons

Everything about Emily Kngwarreye gave the impression of uniqueness. She was a pioneer, breaking new ground. While she searched for her own roots, she paved a way for other artists. This new and exciting way allowed for her culture to be perceived differently by the rest of the world, both Aboriginal people, and the rest of the world. Her work transformed the view that many had about her people, and she also broke the rules when it comes to the complete absence of artistic influences and education in the process of creating art.