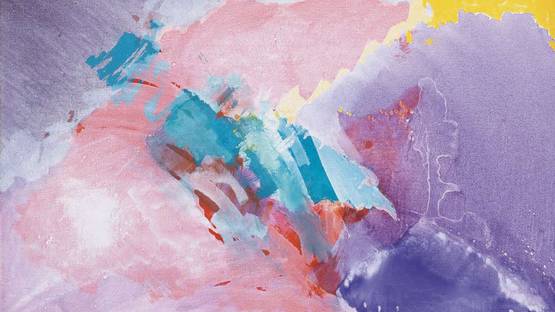 Among the foremost American abstract painters, Emily Mason is best known for compositions characterized by exquisite sensitivity to color, balance, and form.

Mason was born in 1932 in New York to Alice Trumbull Mason, who was a founder of the American Abstract Artists, and father who was sea captain for American Export Lines. She attended Bennington College from 1950 to 1952. In 1952, Mason transferred from Bennington College to the Cooper Union for the Advancement of Science and Art, where she was graduated in 1955.  In 1957, she married a fellow painter Wolf Khan, with whom she lived between the United States and Italy for the next ten years. In 1968, the couple bought a farm in Brattleboro, Vermont where she would spend her summers painting.

In Mason's paintings, painterly gestures coexist with thin, poured layers in a wide range of colors in all manner of hues and saturations. She was informed by both urban and natural environments surrounding her, explaining it is important to balance city life with experiencing nature. She once compared her process to a game of chess: “One more move, like chess—a musical conversation—violin, cello. Pick it up, make a move—wait—let time go in between. Then I know what to do.”