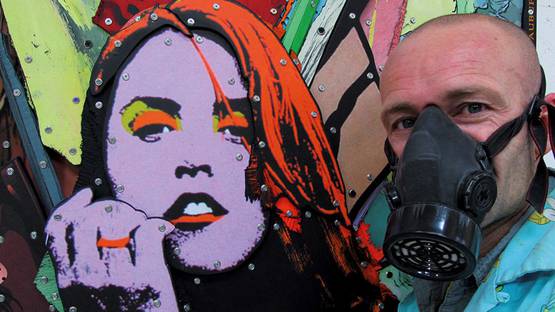 The sculptor, painter, assembler, or collagist, Eric Liot is all of that. The use of different techniques and disciplines mark the creative potential of this multitalented artist. His works include narrative figures caught in the moment that he and other people see in everyday life. He combines found objects, which are then assembled, thus twisting their original purposes and giving them new meanings and shapes. The main material in his art is wood, with all its versions, as it allows his humorous painting-sculptures to take the best elements from different styles. His style refers to popular culture, and the artist doesn’t hide the influence of his peers in his artwork.

The artist was born in 1964 in Caen, France. Although Eric studied architecture first in Normandy, and later in Paris at the Université de la Villette, he realized in the third year of the studies that this is not the career he wants to pursue. Instead, Liot went abroad to countries in Latin America, Asia, East and Central Africa, where his idea and decision to become an artist became more and more clear. So he began to work as a freelance furniture and poster designer. In the last twenty years he recovers visual images, characters, and other consumption figures, by adding themes from the art history, but also contemporary icons like Che, Superman, Bibendum, or Warhol’s Campell Soup can.

Eric is someone who knows how to mix simple images of people’s favorite heroes, plastic toys, cartoon characters, alongside video fragments, thus creating complex mazes of space games that seem as a perfectly controlled disorder. His pieces are defined by logos, consumer products, and wooden elements, but also by bright colors, like the ones which remind of Fauvism artist Henri Matisse. In his art viewers can see the mastery of craftsmanship, a duet with perfection and attention to details. The accent on wooden assemblages, collages, puzzles, and mosaics tells the story of the artist’s journeys around the world and creates new tales about life that surrounds us. The technique that includes slow cuts and pastes of images tends to look as bas-relief, which many call painting-sculptures. This approach reveals his love for carpentry, cabinetmaking, and marquetry.

The accent on wooden assemblages, collages, puzzles, and mosaics tells the story of the artist’s journeys around the world

Liot also adds juxtapositions of diverse wood, screws, bolts, and patinas to images, so reminding on the pop art and consumer society. The author can be considered a builder, as he produces different sorts of metaphors and representatives of today, by taking pictures from the magazines, internet, and other objects that he finds, similarly as Bernard Pras. He has exhibited his art in galleries and museum in Brussels, Lyon, Los Angeles, Paris, Toronto and many others cities.
He is represented by the Galerie Martin Ehmer.

The artist lives and creates in France.

Featured image: Eric Liot with his artwork - Photo copyright of David Pluskwa Galerie
All images used for illustrative purposes only