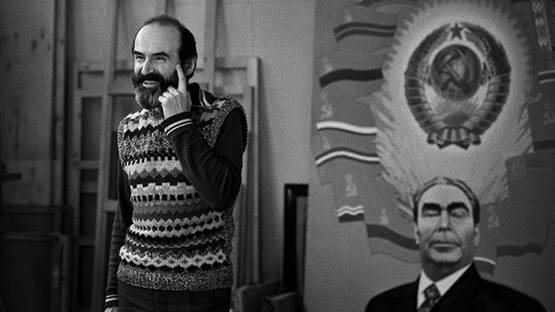 Erik Bulatov is a Russian painter, graphic artist, and book illustrator. He numbers, along with Ilya Kabakov, among a small but significant group of Russian artists who, at a remove from the governmental regulations of the Soviet art system, attained completely independent forms of artistic expression.

Erik Bulatov, born in 1933, graduated from the Moscow Middle Art School, for especially gifted children, where he studied with Oleg Vassiliev and Ilya Kabakov, who also became masters of the unofficial art scene in Moscow. In 1952-1958, he was a top student in the painting department of the Surikov Institute and was expected to graduate with the Gold Medal. Because he organized a student rebellion against the teachers’ curriculum, he was stripped of the award. He worked as an illustrator of children’s books in publishing houses together with Oleg Vassiliev. He could not exhibit in the USSR because of censorship, with the exception of brief shows at the Kurchatov Institute and the Blue Bird Café in Moscow in 1965 and in 1968.

The meaning of his work and the symbolic codes he uses are products of his cultural background. Bulatov lived most of his life in Russia, only moving to Paris in 1991, and the emblems and typography of socialist glorification are unmistakable themes throughout his oeuvre.
Despite difficult working conditions, Bulatov did not emigrate, but continued to develop his work in Russia until the collapse of the Soviet Union, when he moved to France. Bulatov’s paintings can be situated in the realm of political art, despite their lack of unequivocal political or ideological messages. His particular modes of artistic expression are bound to a particular time and place, while also giving rise to multiple visual associations. It is characteristic of Bulatov’s manner of political commentary that he subversively unites opposing impulses.

Erik Bulatov has been considered to be affiliated with Moscow Conceptualism, Sots Art, and hyperrealism, but the artist maintains that that playing with the images and ideology of Soviet official culture is not as interesting to him as much more abstract and even formal subjects - the questions about what is a painting and how does the surface of a painting correspond to the surface of the depicted objects. Bulatov’s drawings and paintings have an extraordinary coherence. His unique, stringent pictorial system was first expressed in his word pictures of the 1970s, where he analyzed the interplay of contrasting symbolic systems, such as language and images or abstraction and illusion – a theme he is still concerned with today.
‘The picture is different. It is the only reality I trust and believe. The world around us is too active, too unstable for us to maintain any true belief in it; everything is in a state of flux, everything is changing. Only the picture is immutable,’ as Erik Bulatov stated in 1987.

A great part of his works are in the major public and private collections in Europe, Russia and United States. After 1989, his active artistic and exhibition work was based in New York until he moved to Paris in 1992. The year 2006 marked the first retrospective exhibition of his paintings in Russia, at the Tretyakov Gallery in Moscow. In 2008, Bulatov became an honorary member of the Russian Academy of Arts.