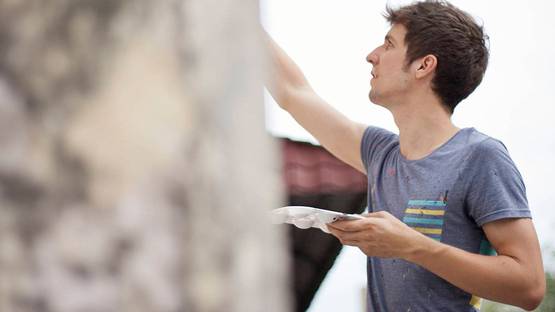 Ernest Zacharevic, better known as ZACH, is a Lithuanian artist whose iconic, lighthearted pieces have become enormously popular across the world. By fusing the physical world with his imagination, this artist makes street art that is realistic but creative.

Zachas – from Lithuania to Malaysia

Zacharevic was born in Vilnus, Lithuania where he started out young, scribbling with crayons on his dad’s newspaper. At some point, his parents decided to take him to an art school, so his professional art education started when he was eleven. After he graduated, he went to Art Academy to study Graphic arts. ZACHAS found that experience not very inspiring and as too much of a replication of his art during school time. That is why he decided to move to London:
“It was a very conservative boarding art school with Greek heads and not much creativity. Afterwards I went to study in London were I graduated with Fine Art BA. It was the opposite – a lot of conceptualism, not much structure.”

But, throughout all that time, graffiti was always there, like a parallel world which, according to Ernest, was the constitution of freedom. After an education of classical arts, Ernest began to develop his works in direct contact with the public space where he intervenes the architectural landscape in a fusion between paintings and recycled objects. On his travels through places like Rome, Brussels, Kuala Lumpur and Singapore (among many) he has not seized to create admiration from the public through his outstanding murals.
He first attracted the attention of the international art scene with the creation of large mural interventions scattered across the old town of Penang. His illustrative style and the use of stencils earned him a nickname The Malay Banksy, as he is referred to by some.

By focusing on the spontaneity of children’s play, Zacharevic can tap into the original instincts of adult viewers who may have lost their ability to access their playful nature. His street art is unpretentious and sometimes ingenious, while steadily staying away from being cloying or overly sentimental. Ernest experiments with objects like for example bikes and old motorcycles in his paintings, giving rise to a true interaction with the local audience. His pieces take on another dimension beyond the painting and the mural in itself and create reactions which provoke an outbreak of smiling faces.

The imagery mostly consists of children playing, but that theme can range from innocent games to handling weapons or other dangerous “toys.” Based usually on photos he takes, the paintings from Zacharevic are not only immortalizing these random people, but also the happy and playful moments they were caught in:
“Sometimes I get inspired by architecture or the atmosphere of a place and spend time thinking for a site-specific interaction or I have an idea and I look for a right place. Usually I work with portraits so I always walk with my camera taking pictures of what I see. Later I translate it to my artwork.”

Art is Rubbish/Rubbish is Art

So, at one moment in his life, Zachas found himself living in Penang, Malaysia, and transforming its streets, with a brilliant series of interactive murals. One of the projects there was Mirrors George Town, a part of George Town Festival 2012. Ernest Zacharevic's wall paintings in George Town include figure drawings and portraits that celebrate the exuberance of life in the inner city. They range from the pensive Boy on a Bike, the lively Little Children on a Bicycle to the whimsical Little Boy with Pet Dinosaur.

Art is Rubbish/Rubbish is Art Exhibition

Ernest's first solo exhibition ever was called Art is Rubbish/Rubbish is Art, which initiated the opening of a new art space in Penang - Old Hin Bus Depot, an abandoned space filled with history. Drawn by the concept "one man’s rubbish is another man’s treasure", Zacharevic unveiled new artworks, installations and series of murals that serve to evoke a sense of awareness amongst the people about their surroundings.

His inauguration into the western street art scene was in Barcelona, hosted by Montana Gallery in 2014. His very first European show was titled Rock, Paper, Scissors! evoking the media of the display, but also the overwhelming infantile and charming spirit of Ernest Zacharevic’s body of work. The exhibit was the unique opportunity to see some of his portraits and drawings on various materials, and to see different art objects that bear the essence of street life atmosphere.

Made Corrections | Art as Opportunity

The idea of this project is to help gauge the impact art might had on its youth offenders. In order to do so, the organizers are inviting different artists to the facility, and have them work with the inmates on creating artwork or decorate the inside walls of this facility.The group was presented with an amazing opportunity to prove that art can overcome great adversity, marginalization and social exclusion in one fell swoop. Ernest Zacharevic worked with a number of the youth in the facility over a few days on several murals and images. The boys were very interested in the life of an artist, so on the final day Zacha organized an open discussion for them all to ask and share anything in a safe place. The inmates were 14 - 21 years old and were all incarcerated for extreme crimes in early isolation. The aim of the project was to engage vulnerable adults in the arts and the process of contemporary urban artists.

One of the 25 Most Popular Street Pieces

“I see my work as an experience rather than an object. Directing the possible encounters of the people who see my work and the artwork is a game and a challenge I enjoy.”

The style of Ernest Zacharevic can be described as immediate, childish, honest and real. So, it is no wonder that in the end of 2014 Zacha found himself, second year in a row, on the list of the 25 most popular street pieces that StreetArtNews readers ranked. His moving pictures of colorful kids playing around in the city are realistic, tangible and human, almost truly alive. The added dimension provides his work with an interactive quality and makes it even closer to the audience.

Ernest Zacharevic is based in Georgetown, Penang, Malaysia.