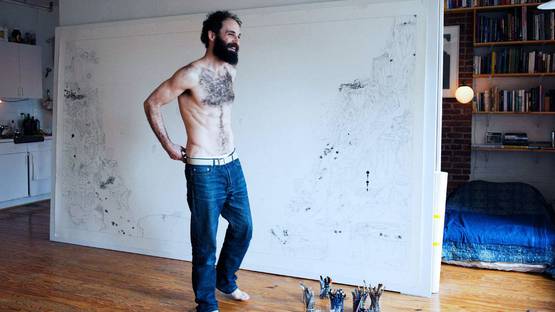 In 2004, Ernesto Caivano, a natural storyteller, burst onto the international art scene with After the Woods, his deeply thought, masterfully rendered ink drawings of an intricately layered imaginary world, one in which he depicted an ongoing evolution between nature and technology as told through an ageless love story between a man and a woman. Caivano’s meticulously detailed ink drawings suggest a fantastic world of apparent congruity, lying just out of reach. A romantic narrative of great scope underpins his practice, but, like artefacts of some lost culture, the drawings themselves mostly resist our efforts to decipher the story. Having already become lost in the formal beauty of Caivano’s line and composition, the viewer encounters an enigmatic cacophony of source material that has been woven into depicted fairy tale. Working without any specific internal chronology, Caivano switches between depicting specific moments in the story and references to its greater cosmology.

‘Instead of trying to figure out all the different interests I had and which to follow, I decided to see if I could put them all together. I loved science, history, and art. I loved the landscape, and I loved to figure out why cultures behave the way they do. I couldn't let anything go’, the artist states. Caivano’s imagined realms are by design a disordered sequence of lost truths, present yet unknowable. Suspended in his fragile world, whose multifarious references never quite coalesce, his artwork create a place where understanding is infinitely deferred. Taking cues from classical myth, medieval folklore, romantic poetry, fantasy, and science fiction, Caivano's meandering, sweeping fairytale centers on star-crossed lovers.

Another great subject of matter in his works are unusual drawings of plants, where blossoms resemble animal faces, veins open into miniature landscapes or abstract patterns, branches catch skulls of long-beaked birds. Executed first in pencil and then in ink, the pristine line drawings are keys to Caivano's alternate universe. Like in Durer’s work, a viewer is drawn to look closer and see the details. Over time, they will discover things in the same way as rereading a text.

Caivano’s works have been included in numerous group and solo exhibitions, and his drawings are in a permanent collection of MoMA - Museum of Modern Art in New York.

The artist lives and creates in his studio in China Town, New York.