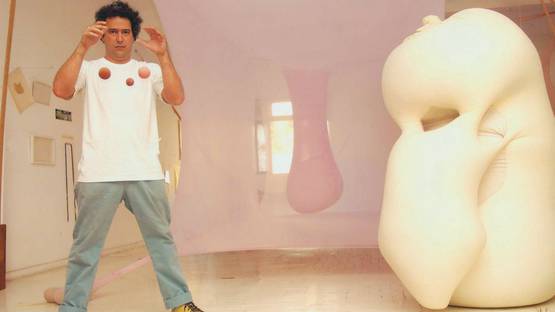 Through his characteristic visual language, Ernesto Neto starts from the idea of interaction and sensory experience, including the audience in his large experimental environments that engage all the senses and questioning the viewer’s perception. Taking from the minimalist sculptural practice, Brazilian Neo Concretism, Biomorphic architecture, and related local avant-garde movements, Neto chooses unusual materials, merging the external and internal structures and making the clear contrast between organic and artificial. His installations offer the escape from the everyday world, providing an opportunity to take a break and slow down through the delicate experience that overcomes all the senses.

Creating Artworks That Beg to Be Touched

Neto was born in Rio de Janeiro in 1964 where he graduated from the School of Visual Arts of Parque Lage (1994-1997) and attended the Sao Paulo Museum of Modern Art from 1994 to 1996. Since then, he produced an influential body of work, exploring the elements of collective space and the natural world by engaging and implementing the physical interaction and sensuous experience. Influenced by the duality of the city he lives in, his artworks represent the same combination of nature and artificial urban constructions, revealing not only the visual delicacy but impressive adventure for all senses. Neto succeeded the generation of Brazilian artists known as Neo Concretists that took a part in the liberation of artistic approach during the 1960’s and 1970’s, changing the viewer’s position in regard to artwork by making him the active part and the one who control the artistic process. He adopted their propositions that became the guide for his development[1]. Making the site-specific sculptural installations, his pieces are characteristic for the use of uncommon materials, often transparent with strange textures. Intertwined nets and cocoons, inwrought with nylon carry unexpected things like candies, sand or colorful Styrofoam balls that fill out nets, forming hanging shapes that fall like drops from the ceiling. With the aim of being experienced, these works beg to be touched. His first appearance in front of the home audience occurred in 1988 at Petite Galerie in Rio de Janeiro and international debut in 1996 in Chicago and the same year in Madrid. A few years later, the visitors of the 49th Venice Biennale were fascinated by his installation Ô Bicho! in which they could wander among nylon stalactites filled with pepper, cloves, and turmeric, simultaneously hypnotizing their visual and sense of smell. Another “aromatic monster” appeared in Paris’ Pantheon in 2006 where his monumental sculpture Léviathan Thot occupied the space between the floor and the domed ceiling. His largest work until that moment was shown in 2010, at the Hayward Gallery in London, representing the embodiment of four million microorganisms inside the human body.

Ernesto Neto showed his art at the 49th Venice Biennale

Entering the World of Ernesto Neto

Using the crocheting that he learned from his grandmother, Neto stretches the sewed flows to its boundaries, knitting the web successively, by intuition. Asking the viewer to slow down, walk carefully and feel the surroundings, his installations influence on people to notice their own body and its respond to different spaces. For Bicho SusPenso na PaisaGen (2012), placed at Leopoldina Station in Rio de Janeiro, the artist created colorful crocheted net spread through entire expanse with transparent passages that float above the floor, leading the visitors into the smaller rooms made of Styrofoam filled bags that one can stand on top of. His Bicho (Beast) represents unpredictable creature with the animal characteristics. Not burdening his contents with additional meaningful explanations, Neto leaves them available for interaction and individual experience striving to create not only simple adult playgrounds but an idea of adventure felt in a moment.

Following the tradition of Brazilian Modernism that advocates the idea of viewer’s presence and active participation, Neto’s installation Boa, placed at Museum of Contemporary Art Kiasma in Helsinki, from March until September 2016, again gives the opportunity to escape from the stress of everyday life by devoting some time to senses. This time, the artist was inspired by tradition and rituals of Huni Kuin, the indigenous tribe from the Amazon rainforest who truly believe in binding with nature and other living things. Borrowing the shape of the head of a boa constrictor, his new installation contains the same essence as the previous with an additional view on respect of the cultural differences[2].

Ernesto Neto: Who Had a Chance to See His Art?

Neto’s work has been the subject of major exhibitions worldwide. In 2011, Museo de Arte Contemporáneo de Monterrey in Mexico opened the artist’s first survey exhibition, La lengua de Ernesto: retrospectiva 1987-2011, which traveled to Antiguo Colegio de San Ildefonso in Mexico City in 2013. The artist also presented important solo exhibitions at the Nasher Sculpture Center in Dallas (2012), Faena Arts Center in Buenos Aires, which traveled to Estação Leopoldina in Rio de Janeiro (2011-2012), Hayward Gallery, Southbank Centre in London (2010) Museum of Modern Art in New York (2010), Fearnley Museum of Modern Art in Oslo (2010), Sao Paulo Museum of Modern Art (2010), Museo d’Arte Contemporanea Roma in Italy (2008), Museum of Contemporary Art, Sydney, Australia (2002), and the Hirshhorn Museum and Sculpture Garden in Washington, D.C. (2002), among others. In 2001, he represented Brazil at the 49th and 51st Venice Biennale[3]. His work has also been featured in numerous group exhibitions and biennials, most recently the Sharjah Biennial 11, curated by Yuko Hasegawa in the United Arab Emirates (2013), along with 2013 group shows at the Denver Art Museum, Schirn Kunsthalle in Frankfurt, and Casa de Vidro Lina Bo Bardi in São Paulo as part of The Insides Are on the Outside, curated by Hans Ulrich Obrist. His work is held in international collections, including those of the MoMA in New York, Tate Gallery in London, Solomon R. Guggenheim Museum in New York, Carnegie Museum of Art in Pittsburgh, Museum Boijmans van Beuningen in Rotterdam, Centre Pompidou in Paris, Hara Museum in Tokyo, Contemporary Art Center of Inhotim in Brazil, Hirshhorn Museum and Sculpture Garden in Washington, D.C., Milwaukee Art Museum, Museum of Contemporary Art, Los Angeles, among many others[4].

The artist is represented by Weng Contemporary Gallery.