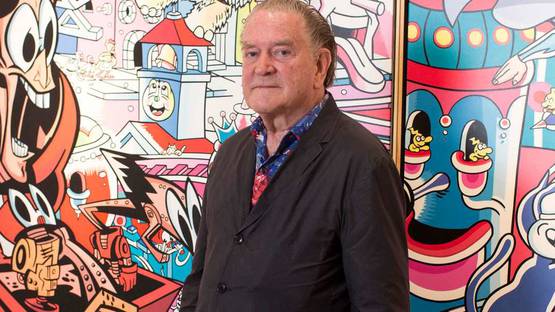 Coming from Iceland, the land full of beautiful landscapes, Erró has become a multi-disciplinary artist known all around the world. His style can be defined as Pop Art and Postmodern, but he can also be considered as a painter in a traditional sense, whose techniques remind of the classical European artists. Besides paintings, he also creates collages, drawings, prints, sculptures, and films. His love for traveling has taken him to places worldwide, where he collected and reassembled numerous posters, advertisements, comics, and news images, which usually included figures from artworks by Eugène Delacroix, Fernand Léger, and Pablo Picasso. These elements serve him as an inspiration. Through his ironic, sarcastic, and critical visual art, he condemns war, autocracy, economic and cultural hegemony. He is one of the first artists to recognize the significance the consumer society and media world will have in the contemporary art.

Guðmundur Guðmundsson better known as Erró was born in 1932 in Ólafsvík, Iceland. In 1951 he graduated from the Reykjavík School of Visual Art, where he was introduced to the technique of paper cut. In 1952 the artist moves to Norway to study fresco, painting, and engraving at the Oslo Academy of Fine Art. During 1954 the author studied at the Florence Academy of Art and then moved to Ravenna. Here he got familiar with the art of the Old Masters and mastered the mosaic technique. A few years later, in 1958 Erró settled in Paris, and soon became associated with the Narrative Figuration movement, whose representatives are Gérard Fromanger, Jacques Monory, and Bernard Rancillac among others. While visiting New York on several occasions between 1962 and 1966, he had the opportunity to learn and embrace new imagery, which was, unlike the one in Europe, much more colorful and impressive. During the 1960’s he also made a number of experimental movies. The first film called Grimaces was made with the producer Claude Givaudan.

In 1958 Erró settled in Paris, and soon became associated with the Narrative Figuration movement

In his early tempera and ink works from the 1950’s, Erró incorporated creepy figures that intertwined in what seemed as the endless struggle. Since the beginning, he was focused on the collage technique. The piles of images comprised of reproductions, posters, leaflets, postcards, news and magazines clippings served as a basic point from which he built his masterpieces. He is known for working in series, like Chinese, political, and erotic cycles- a very long process, which takes years to make collages that are transferred to paintings and canvases. He is often compared with the earlier Pop artist like Roy Lichtenstein, Andy Warhol, and James Rosenquist.

He is often compared with the earlier Pop artist like Roy Lichtenstein, Andy Warhol, and James Rosenquist

The Reaction to Everyday Happenings

The use of daily ongoings in his art is explained with the fact that he wants to reinterpret the present before it goes into oblivion. In the series like Radioactivity and Meca-Make-up this Icelandic artist makes bold pieces permeated with political messages, as a reaction to the shocking images derived from the wars in Algeria and Vietnam, as well as from the rock music. Erró applies his own type of utopia to the paintings, in which he shows the beauty of contradictions and the joy of provocations. His compositions are cleverly composed of Disney characters, movie stars, comic-book heroes, and statesmen.

Erró applies his own type of utopia to the paintings

In 1989 the artist donated around 2000 works to the City of Reykjavik, establishing the Erró collections within the Reykjavik Art Museum. In 2000 the Icelandic Parliament awarded him the Honorary Artists Stipend and the next year with a museum dedicated to his art. Since his first exhibition at the Galleria Santa-Trinita in Florence in 1955, he displayed his pieces around the world like at the Museum of Modern Art in Paris in 1985, at the French National Gallery in 1999 or at the Valencia Institute of Modern Art in 2006. He exhibited alongside Duchamp, Max Ernst, Botero, and Velickovic. He also published fifteen monographs. The major retrospective of collages made during 50 years was held at the Centre Pompidou in Paris in 2010.
He is represented by the Galerie Brugier-Rigail.

Erró is based in Paris but also spends time in Spain and Thailand.

Featured image: Erró in front of his work - Photo via geuer-geuer-art.de
All other images copyright of the no-art.info; All images used for illustrative purposes only