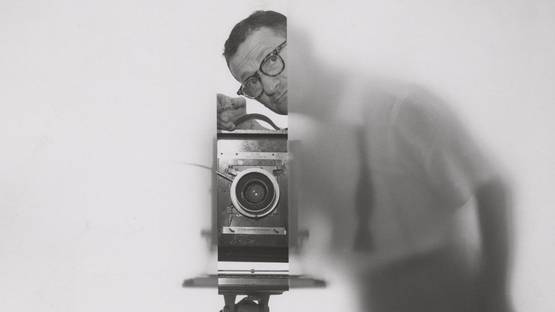 Considered as one of the most innovative and influential photographers of the 20th century, Erwin Blumenfeld made a significant contribution to the fashion industry between 1940’s and 1950’s. His photographs were on the postwar pages of Vogue, Harper’s Bazaar, Cosmopolitan, Life and Look magazines. Besides the fashion photography, his oeuvre includes portraits of celebrities, fine art photography, as black-and-white nudes, drawings and Dada collages. The undiscovered part of his work consists of the hundreds of Dadaist photomontages produced between 1916 and 1933, never exhibited during his life, and of numerous transparencies from fashion shoots found in his New York studio after his death.

Born in Berlin, Blumenfeld got his first camera in 1908, at the age of eleven. After the World War I he established his own store of ladies’ handbags in Amsterdam, The Fox Leather Company. Equipping the dark room, he began to photograph the female clientele of the store, displaying the images in the window. In a short time, these photographs became more popular than the products in his shop and he started to actively participate in the Dutch art scene. The first exhibition of this work was in local gallery Kunstzaal van Lier. In 1936, he had to move in Paris, because of the bankruptcy of the shop. Photographing the portraits of the famous people from the art world, like Henri Matisse and George Rouault, Cecil Beaton was impressed by him which earned him the contract with the France Vogue. Because of his Jewish origins, the Nazi regime forced him to leave the Europe. In 1941, Blumenfeld with his family moved to New York.

For the first three years in America, he was under contract with the Harper’s Bazaar, and after that he started a freelance work for American Vogue. His first double page in this magazine was published on May 15, 1944. It was a photograph of the his daughter Lissete’s legs, made eight years earlier. In the next fifteen years, he worked for all leading magazines, for Minneapolis department store Dayton’s and at the same time produced advertising campaigns for cosmetic clients, like L’Oreal and Helena Rubinstein. During the 50’s Blumenfeld was the highest payed photographer around the world. His studio was a place where all famous ladies of that time were stopping off, from Marlene Dietrich and Audrey Hepburn to Grace Kelly.

Being Ahead of His Own Time

From his beginnings, Blumenfeld was experimenting with colors, darkroom techniques (solarization, multiple exposures, combining positive and negative images) and the use of mirrors and light. Black-and-white photographs of nude are considered to be among his best works, but the colored fashion images made him rich and famous. His idea of making films as a purpose of beauty advertising was ahead of his time. He drew his early inspiration from the Dadaist whom he owes his passion for photomontage. Of crucial importance was the work of Man Ray, whose photographs he saw in one French magazine of the time, which inspired him to push further with his own experiments.

Essentially, his approach to fashion photography was radical avant-garde and that is inheritance of the life in the first two decades of the 20th century. He lived in Berlin when Dada was born, in Galerie Der Sturm, where the young Germans opened their eyes for Cubism, Futurism and Constructivism. Blumenfeld took his Dadaism with him when he moved to Amsterdam, and later in Paris. The montages he produced between 1916 and 1933 were made of different postcards, theatre programs, adverts in the combination with his own photographic fragments, texts and drawings. In the fashion photographs he repeats the habit of cutting, covering and vailing as in his montages. Deconstructing the picture plane with accumulation of the pasted fragments he creates in the same visual filed.

My One Hundred Best Photos

Began almost by accident, Erwin Blumenfeld's career of professional photographer took him to the positions and places which he probably couldn’t even imagine when he was a little boy with gifted camera. His talent and different preferences were evident when he produced his self-portrait as Pierrot in 1909, using the mirror with the intention to display his face and profile at the same time. His legacy which includes thousands of prints, transparencies and collages, Blumenfeld left to his children. His autobiography and his book My One Hundred Best Photos were published posthumously, in 1975.