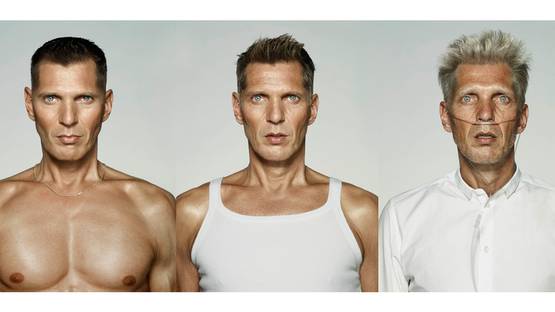 Erwin Olaf is a Dutch photographer famous for mixing photojournalism with studio photography.

He was born in Hilversum in the Netherlands and studied journalism in the School of Journalism in Utrecht. Olaf emerged on the international art scene in 1988, when his series Chessmen was awarded the first prize in the Young European Photographer competition. This award was followed by an exhibition at the Ludwig Museum in Cologne, Germany in the same year. In his earlier work on the subject of social exclusion Olaf was deliberately disturbing with the intention of raising awareness and he was dedicated towards exploring issues of class, race, sexual taste, beliefs, habits and grace.

Erwin Olaf's art implicitly visualizes the unspoken, the overlooked, that which typically resists easy documentation. Olaf's trademark is to address social issues, taboos and bourgeois conventions within the framework of a highly stylised and cunning mode of imagery. With the aid of his razor-sharp aesthetic intuition, Olaf purposely conceals his themes so that the viewer unconsciously and initially accepts the concealment found in his photo series. Yet in the end, his unconventional style never fails to deliver dramatic visual and emotional impact. By providing scenic and striking design, along with the utmost perfect composition in his typical, immaculate 'OWN' style, combined with his passion for conceiving flawless scenarios, he vividly captures the essence of contemporary life.

An ever-rising photographer, his work constantly garners new attention, and maintains the respect of his loyal fans. His ‘oeuvre’ is a manifestation of his incredible passion and genuine engagement with subjects. Olaf has been professionally active for over twenty-five years, and in this period he has succeeded in evolving from a participating photographer to a director who creates his own reality. Olaf’s pictures are filled with humor, imagination and exuberance, but they go much further than simple visual intrigue. His work broach ideas and visions of freedom, beauty, loneliness, and being different. He convinces his public in a shameless and versatile manner, questioning established norms. Olaf consistently expresses his own standpoints, fulminating against narrow-mindedness, smugness, and rigid norms, but not without humor, bravura and bite.

In 2013 Erwin Olaf's design for the new national side of the Dutch euro coins was selected from 12 designs by competing artists. In the beginning of 2014 the new coins came into circulation. Aperture  published a new book in the fall of 2014. The book is an overview of Erwin Olaf's work throughout the years, including his most recent work.

He lives in Amsterdam (the Netherlands).