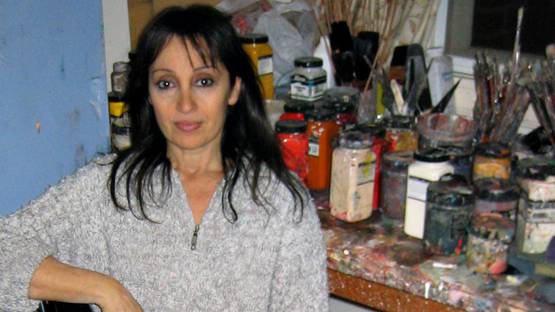 Esther Erlich is one of Australia's most respected portrait artists whose career spans over three decades. She is best known for her raw, intense and spontaneous pieces which include eye-catching figurative paintings, portraits and sculptures. Erlich’s works are spontaneous and brilliant mixture of thought, beauty, provocation and wit, often with a touch of irony and humour. Ever vivid and evocative, Erlich is noted for her portraits depicting sensuous, self-possessed, sprightly, cheerful and outgoing subjects.

Born in Melbourne in 1955, she studied at Melbourne State College and Chisholm College, graduating with Dip. Ed. and Diploma in Fine Arts. After graduation she rapidly became one of the well-known figures in the Melbourne art scene but also beyond Victoria’s coastal capital. In 1988 Erlich won the highly regarded and one of the richest portrait prizes in the world - Doug Moran National Portrait Prize - with a portrait of marathon runner Steve Moneghetti and was a finalist in the same Prize two years later. She is also a 4-time finalist in the Archibald Prize, winning the People’s Choice Award - voted for by the public visiting the Archibald exhibition - in 2000 for her portrait of Bill Leak. She has been a finalist in the Portia Geach Memorial Award on eight occasions.

The artist is based in Melbourne.

All images courtesy © the artist and 19 Karen Contemporary Artspace