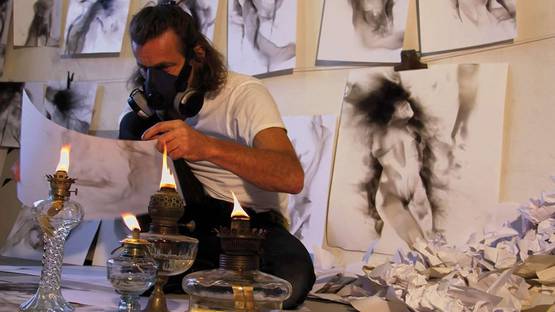 Everything that comes into existence can be compared to the progression of light forming out of darkness; simplicity growing into an unending complexity. It’s been the same for art as a whole, growing as a craft throughout the ages to its wide peek we see today. Yet, no matter how far the artistic practice develops, the basic forms are bound to permeate it in its core. One such form is the one of the female body, and the artist to bring it back into the center of his art is Étienne Gros. Coming from the human mind, art has seen the female silhouette in every generation, and Gros is more than a fine representative of ours, putting new twists on the known subject.

The Form of Female Body

Having studied at les Beaux-Arts d’Epinal and les Beaux Arts de Versailles et les Beaux Arts de Paris between 1981 and 1986, the French artist Étienne Gros devoted himself and his artistic practice to depicting a subject present in the oldest of tales of art: the female figure. The symbol of desire and birth of new life, the focus of Gros’ works is often kept on the central part of the body, avoiding the depiction of limbs in his latter part of career. Paintings that denote a certain power through colors, yet a fragility of pose, are expressive and sensual seeming to try to protect their vulnerability. What Gros has introduced as a novelty to the contemporary art field is the way in which he portrays the body, moving past the medium of pure painting.
Gros has introduced as a novelty to the contemporary art field

Already known for his sculptural work in addition to his work on canvas, Étienne Gros makes truly uncanny pieces. Using soft foam as material, he nips and modifies chunks of it to create sculptures of female torsos. Titled Les Mousses which stands for The Foams, these unexpected creations remind of the statues of old, forming nudes without limbs or a head. Mastery of the subject doesn’t end here though, as Gros found another way to impress the viewers and perhaps introduce a new dimension to contemporary art. By applying smoke of lamp oil into the surface of the canvas, the artist creates stunning portrayals of the female body. With no more than the contrast of shadow and light, the natural, as well as highly unpredictable volumes produce stunning effects that suit the subject. The fact that Gros discards a lot of these paintings speaks of the level of skill required to make them, giving these fantastic images even more value.

Returning to the Source

Establishing a varied practice around a single subject, Étienne Gros returns to the very root of the artistic portrayal, depicting the female body and translating its natural allure more than well. Introducing most of us to the possibilities of the flame, he moves his practice towards the burning light, perfecting it and evolving within the contemporary art world. With a number of exhibitions under his belt, Gros impresses a growing number of viewers by the day, making him a creative force to follow.