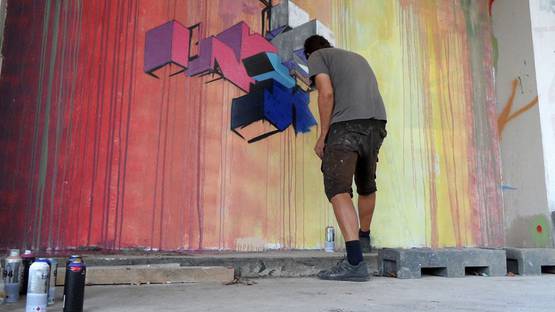 Etnik is the alias of Italian-Swedish street artist Alessandro Battisti whose art shows his great sense for balance and composition creating a recognizable style through vivid colors and geometrical objects, that almost create a 3D effect.

Etnik is the pseudonym of the multifaceted figure of Alessandro Battisti, a self-taught artist who started his career in the late '80s in Florence where he attended art school and began to exhibit. Its production ranges from large scale murals with elaborate concepts, to productions on canvas and sculptures, adding to the rules of lettering, the starting point of all his work, consisting of a 20 years imaginary of study and development of his own style.

He took his first steps in Graffiti writing in the early 90s in the underground culture of Florence. Soon, he became one of the most active and complete artists of the Italian writing scene, to which he has brought unusual and personal contributions, coming from his own background in the field of illustration and stagecraft. His passion for this discipline has led him to create works of art in his own recognizable style, to participate in major public events and to collaborate with the best writers of the international scene. After twenty years spent painting the outskirts of urban areas and searching for new ones to discover, the artist integrates his research on lettering – which is not merely limited to the pure aesthetic of letters – in the reflection on the concept of “city”, finding a new point of view that has become the main subject of his painting. The lettering becomes the basis on which Etnik sets the whole concept and composition of its new personal and artistic research. The letters transformation – making up his name in seemingly unrecognizable geometric shapes – is the starting point on which he builds architectural modules related to urban settlement stereotypes that intersect violently on opposite planes and with unsettling points of view to represent a more and more coercive cement as well as an increasingly more precarious balance in our everyday life. The ‘series’ becomes subject and object of study, finding in its sculptural and mural transposition most spectacular and daring expression. In 2009, he sets up with Duke1 the collective Bunker108 that works together with public and private institutions for the restyling of buildings or urban areas and organizes workshops and exhibitions of various kinds.

While his studio is in Florence, his work takes him further abroad in Europe, and also to America, where he searches for the most innovative scenes. Ten years ago he began his current project, his “Prospective Cities” series, which defines the bulk of his work today. Each work imagines a different floating ‘3-D’ city, amidst a changing sea of shapes, colors, and perspective. The work of Etnik does not stop only at this, his versatility and his talent led him in 2009 to create in Florence, along with Duke1, the collective Bunker108 together they produced workshops, working with both public and private entities for the restyling buildings or train stations and participates in exhibitions of various kinds. His works can be found in private and public collections.

He currently lives and works in Tuscany, in between Pisa and Florence.