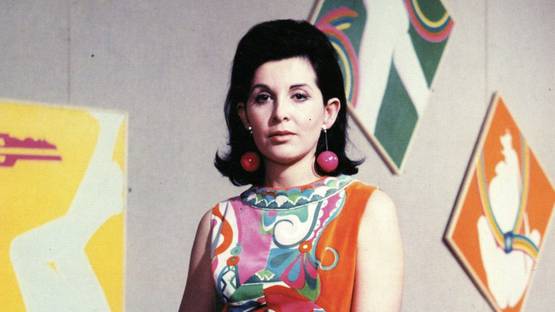 Evelyne Axell née Devaux was born on 16 August 1935 in Namur, Belgium, becoming a part of a traditional, middle-class Catholic family. Her father, André Devaux, was a relatively well-known craftsman in silverware and jewelry whilst her mother, Mariette Godu, came from a very modest family and was a homestay. Interestingly, at the age of two, Evelyne was declared The Province of Namur's most beautiful baby - luckily for her, that beauty continued to be a defining feature of her life as the woman was growing up. After graduating from high school, she studied pottery at the Namur School of Art (1953). In 1954, she switched to drama school and quickly began a career as an actress and married the Belgian film director Jean Antoine. In 1959, she moved to Paris to pursue a more serious acting career - however, she found this job to be too trivial in real life scenarios and eventually opted to switch her career goals.[1]

Taking a Turn Towards Painting

In 1964, Axell quit her relatively promising acting career so she could pursue painting. She enlisted Surrealist painter René Magritte, a family friend of her husband, to be her artistic mentor. After abandoning the technique of oil which served as an initial stepping stone, Axell’s early works started to use her unique aforementioned method and tackle deep changes occurring within an increasingly disputed, gendered, social order. Axell created her own style[2] of Pop art, becoming one of the first Belgian authors to experiment within this avant-garde idiom. At this time she started to use the androgynous name Axell professionally, in the hopes that she would be taken seriously as an artist despite her gender, youth, beauty and the explicit sexual nature of her work. With an artistic vocabulary that was only getting better and more complex, her life and career were unexpectedly cut short in a tragic car crash outside of Gent[3], Belgium, in 1972.

Relying on all the new visual tools of the 1960s, Evelyne Axell proved that her decision to leave acting in order to dedicate herself to painterly art was the right choice to make

Pivotal and Popular Despite All the Obstacles

After all was said and done, Evelyne Axell might not only be the most pivotal Belgian female representative of Pop art - she is probably the most important female Pop author outside of the United States and the British soil. However, as the case is with many modern female authors, she is often overlooked as her male contemporaries are often placed much closer to the spotlight. Her career's biggest problem was not related to any creative, stylistic or visual issue - it was the time period in which she created her art, a time period that was marked by a conscious directive to make sure male painters are the ones getting the most, if not all of the public attention. Victims of such a policy, Evelyne Axell and her art have been pushed under a rug for the last half a century - fortunately, as the times flew into the more contemporary waters, the work of this artist is now finally appreciated for all its achievements and the name of Evelyne Axell is finally celebrated as being one of the finest Pop authors that did not work within the borders of the USA or the United Kingdom.

Featured image: Evelyne Axell - Photo of the artist - Image via mayorgallery.com
All images used for illustrative purposes only.