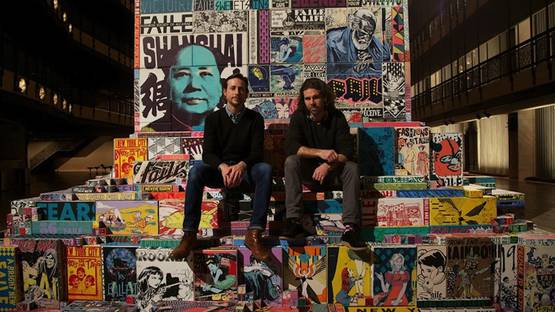 FAILE is an artistic collaboration between Patrick McNeil  and Patrick Miller, known for a wide ranging multimedia practice recognizable for its explorations of duality through a fragmented style of appropriation and collage.

Patrick Miller and Patrick McNeill, two close collaborators grew up together in Arizona, USA during the 1970s. They began working together in New York in the late 1990s. Aiko Nakagawa, an early collaborator, left to pursue her own career under the name Lady Aiko in 2006.

From their beginnings stenciling and wheat-pasting collages made from pulp imagery, including fliers for underground music acts and specialist prostitutes, to their incredibly successful print editions inspired by comic book culture, to the ambitious architectural works such as The FAILE Temple and giant sculpture The Wolf Within, FAILE have constantly evolved their unique artistic style. The forms of expression they chose seem contradictory – arcade machines and traditional American quilts for example. But they are a reminder that progressive subcultures like urban art often spotlight that which can be found lacking in mainstream thinking.

While painting and printmaking remain central to their approach, over the past decade FAILE has adapted its signature mass culture-driven iconography to vast array of materials and techniques, from wooden boxes and window pallets to more traditional canvas, prints, sculptures, stencils, installation, and prayer wheels. FAILE's work is constructed from found visual imagery, and blurs the line between “high” and “low” culture, but recent exhibitions demonstrate an emphasis on audience participation, a critique of consumerism, and the incorporation of religious media, architecture, and site-specific/archival research into their work.

The duo made a smooth transition from street activity to gallery pieces when they began exhibiting in the early 2000s. These shows featured large format, limited edition works on paper and board, plus physical items such as "FAILE boxes", which resemble chests for personal keepsakes. The two-dimensional pieces at first followed the collage format of their street work, but soon evolved into mini-narratives taking the form of imaginary comic book covers. These compositions are produced to such a professional level that one is left wondering if they are original or appropriated. Often they contain considerable hand finishing, and due to handling during the process often appear "worn" or "vintage" in feel. Besides a voracious market in limited edition works on paper and imaginative sculptural works, FAILE's career since those first gallery shows has been characterised by a number of impressive large-scale installations.

They live in Brooklyn.