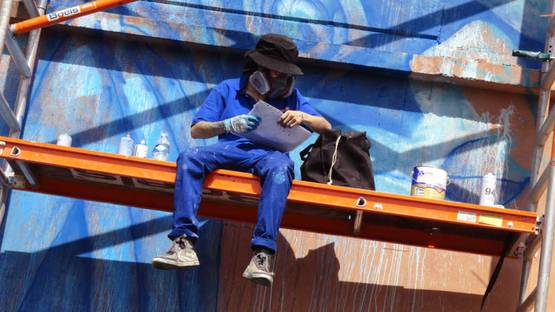 Expressing the thoughts of Eastern philosophy, religion, and science, Chinese street artist Fansack combine his heritage with the French spirit of freedom. He skillfully uses the blue color revealing his distinctive art language. His characters painted in this color convey the impression of calm and generosity. Discussing the development of worship in different cultures, Fansack draws attention on sensitive topics, as politics, philosophy, religion. From ancient world, when people believed in next cycle of life in Heaven, and later use of religion in politic purposes for strengthening the ruling power, today world adopted a personality cult. Recently, modern technology creates a false sense of security, becoming a sort of religion.

Clearing the Line Between the Earth and Sky

Starting to paint on the streets of different cities in China in 2003, five years later he moved to France in order to study statuary art. There he meets the French artists with who he likes to paint, especially the painter Kongo. He adopted so-called International Klein Blue, the pigment named by controversial French artist Yves Klein, which “blur out the edge between earth and the sky, eliminating the horizon”. His recent work contains the balanced mixture of images of the East and West, traditional and contemporary symbols, visual arts, formalism and Klein blue. These elements are carefully selected and arranged in his personal way of Zen spirituality.

In accordance with his beliefs, his favorite characters are monkeys. From the evolutionary perspective, people come from apes and primates. Also, he often depicts the faces of contemporary Chinese artist Ai Weiwei, Albert Einstein and Gandhi, considering those three important figures as holders of the spirituality in their spheres of interests. In addition to monkeys and religious persons, Fansack’s work represents the image of science and technology. Drawing his inspiration from the worship of wealth, he deals with the topics trough the silent Buddhism and idea of the boundless universe. Suggesting the viewer to return to the inner self, Fansack strives to the liberation of lust and blind idolatry and reaching the state of clear mind.

Fansack’s work represents the image of science and technology

Rejecting the Idea of Blind Worship

Living in a Paris, fertile soil for artists, Fansack’s art had a chance to enter the gallery space. Being exposed to the street art for the 15 years, his creative energy comes from the feeling of freedom. His style is an echo of personal experiences, interests, thoughts and gained knowledge, connected with religion, traditional culture, sub-culture and pop culture. Using, in the artistic world, the well-known pigment of International Klein Blue, his images takes the new, otherworldly dimension. The feeling of serenity is in accordance with Buddhism, but presence of scientific symbols refers to different interests. His work send the message that dismissing the idea of blind worship, people must try to find harmony with their inner being.

Fansack lives and works in Paris.

Featured image: Fansack - portrait
All images courtesy of the artist