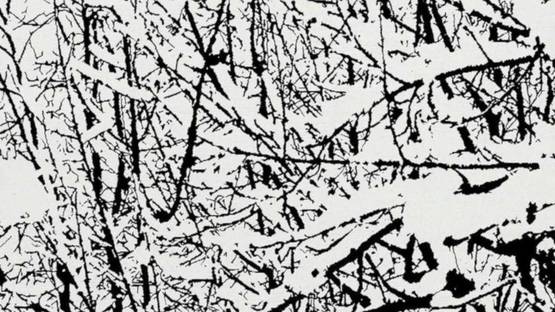 One of the most interesting Iranian artists today, Farhad Moshiri has developed his own artistic style in which he blurs the boundaries between Iranian and Western cultures. Drawing inspiration from pop and conceptual art, comics, classical portraiture, advertising and religious iconography, he creates witty but thought-provoking pieces using everyday objects such as household items as well as sparkly, luxurious materials including crystals, sequins, jewels, gold leaf, and pearls. Moshiri gained international recognition in 2008 when his stunning mixed media work Eshgh (Love) achieved an auction sale of more than one million dollars, making him the first Iranian contemporary artist to beat the six-zero mark.[1]

USA and Return to Tehran

Born in 1963, in Shiraz, one of the most populous cities in Iran, Moshiri relocated to Los Angeles at the age of fifteen to pursue his further education. During his studies at the California Institute of the Arts, the artist encountered such names as Michael Asher, John Baldessari and Don Buchla.[2] At the same time, he experimented with a wide range of media including installations, video art and painting. Upon graduation in 1984, he spent several years in the US and returned to his native country in 1991. A decade after Moshiri came back to Tehran, he became internationally known for his large-scale oil paintings of jars and bowls that served as a metaphor for desire, life and memory.

The artist experimented with a wide range of media including installations, video art and painting

Iranian artist uses a variety of techniques and materials in his practice, ranging from traditional Iranian embroidery to paint diffused through cake icing dispensers. One of his most famous installation to date was made using hundreds of variously colored kitchen knives to create some exquisite typography.[3] By sticking knives into the wall of Galerie Emmanuel Perrotin in 2009, he spelled out Life is Beautiful in cursive creating a nice statement considering the fact that it is made of something that has the ability to destroy. I’m so fucking happy, Comfort, I got sunshine, Paradise and Run like hell are some of his similar knife works that spell out creative and thought-provoking messages.

By sticking knives into the wall of Galerie Emmanuel Perrotin in 2009, he spelled out Life is Beautiful

Recognized for his ironic pieces of art that represent hybrids between traditional Iranian forms and those of the globalized pop culture widespread in his country, Moshiri’s artworks are often very fantastical, but at the end, they have a cynical and sarcastic note as the punch line. In all of his works, Moshiri provides the viewers with a message that might seem witty and amusing at first sight, but after a closer inspection, it succeeds in raising discussion in a western, middle-eastern and global context. He has participated in numerous group and more than twenty one-man exhibitions at such places as Galerie Emmanuel Perrotin in Hong Kong and Paris, Galerie Thaddaeus Ropac in Salzburg, Galerie Rodolphe Janssen in Brussels, Daneyal Mahmood Gallery, Chelsea NY, Albareh Gallery, Bahrain, and others. His work is included in the collections of the François Pinault Collection, the British Museum, the Virginia Museum of Fine Arts, and Dubai’s Farjam Collection.[4]