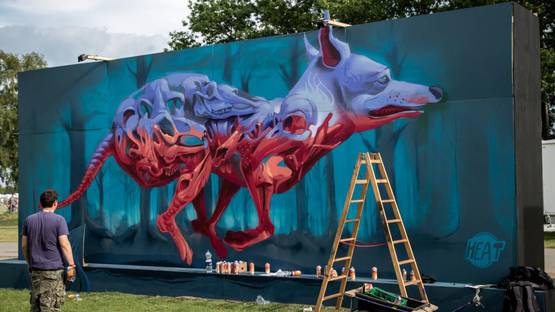 Inspired by the monumental multicolored letters that can be seen on the walls of his neighborhood, Fat Heat got into the world of street art in 1998 and soon built his name among other eminent urban artists. This self-thought Hungarian artist immediately became addicted to the graffiti and the colors, energy, and size it transmitted. He discovered a whole new world, where he could feel free, and express his creativity and imagination. His artworks are depicted in a simple style, leaving the recognizable form and lines, with which the author wants to take viewers to a parallel universe defined by awkwardness and tension.

The Interfusion of Comics and Music as an Inspiration

Born in a small town in Hungary, now based in Budapest, Fat Heat started from graffiti writing, seen in the NYC scene, gradually moved to 3D lettering, and then turned to illustration, focusing on figurative stuff. Without any formal training in art, he picked up information from the internet, read books and practiced some dry stuff. As he admits, hard working people really influence him, alongside with aesthetics of the comics artists like Kim Jung Gi, James Jean, Sergey Kolesov, Mode 2, Craola, Feng Zhu, T Wei, David Choe, and many others. The variety of music genres, from Deep Purple, Gaslamp Killer, to Run the Jewels, have always inspired him, by giving him the energy, and changing his mental state, while drawing and painting. Yet, the biggest driving force is the aspiration to improve his skills and to get better and better with each piece.

Fat Heat started from graffiti writing, gradually moved to 3D lettering, and then turned to illustration

This visual craftsman as he describes himself creates massive colorful murals, canvases, illustrations, and digital work in which he tries to explore the relationship between the hunter and the pray. The central theme of his art in the last couple of years is the instincts, and the difference between humans and animals, if such exists. The reason for this is the growing alienation of people from nature as if they are above the system, and not the integral part of it. As someone who draws a lot, Fat Heat expands his visual library and prepares before applying his spray colors to walls. The rough sketches are just the basis that is usually changed, transformed, and adjusted to the ratio, surface, or the shape of the wall.

The central theme of his art is the instincts, and the difference between humans and animals

In 2016 the artist painted a huge mural called Living space that really made him proud, because of its size, 28mx12m, and the combination of the two-dimensional augmented reality animation. His pieces can be seen in cities around the world like Amsterdam, Budapest, Paris, Banja Luka, Ningbo, and many other. He keeps making vast artworks in abandoned place without any compromises.

Featured image: Fat Heat in front of his artwork
All images courtesy of the artist