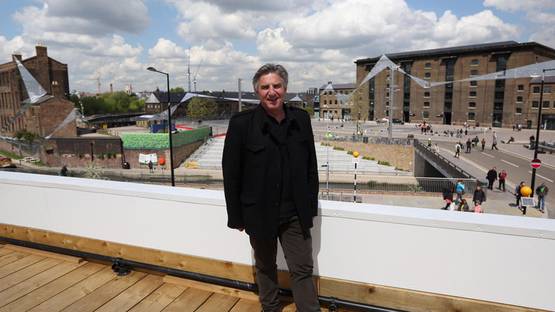 Many of life’s situations require a different perspective in order to be fully understood and appreciated. Maintaining a straightforward mindset and view on things might keep you from seeing the bigger picture, one that might reveal an astounding truth that simply isn’t visible by the look of its parts. Implementing this exact principle in his art, Felice Varini plays with the space of many indoor and outdoor locations, providing the satisfaction of realization of the actual piece to those that are willing to change their perspective. Varini is best known for his geometric perspective-localized paintings made by using an unusual projector-stencil technique. Because of this interesting and seemingly non-poetic approach, his work is humorously labeled as an anti-Mona Lisa. Nevertheless, whether you see the formatted image Varini was aiming for or an abundance of abstract, fragmented pieces of the work, there's a certain appreciation to be felt at the end of each road.

In Preparation for the Piece

Having started his practice back in 1979, Felice Varini had always implemented the same principle in his works and they've certainly grown in size over the years. His initial implementations were mostly limited to indoor spaces, altering the perception of the viewer within the corner of the room or a hallway; today, his portfolio includes pieces that cover spaces as large as several consecutive buildings, and even an entire village. Naturally, a lot of preparation goes into each piece, both mental and practical. Before any type of specific calculations can even begin, Varini roams the space designated for his future painted artwork, making mental images and noting its history, the materials, and its function. Given the nature of his large-scale paintings, he decides upon a spot from which the artwork takes a whole different shape: a vantage point that pulls the three-dimensionality of the space down to the two dimensions of the piece itself. Varini's paintings are typical for their single vantage point perspective, from which the viewer can see the entire paintings while from other view points the viewer can spot only a sea of fragmented, broken shapes. Varini wants his viewers to be aware of both possible readings of his works - his pieces certainly exist as an organized whole, but one can't enjoy them completely if no being able to discern their fragments as well. My biggest concern is what happens outside the vantage point, said Varini about the nature of his work.

Felice Varini likes to search for and use a specific vantage spot from which an entire artwork takes a whole different shape, flavor and perspective 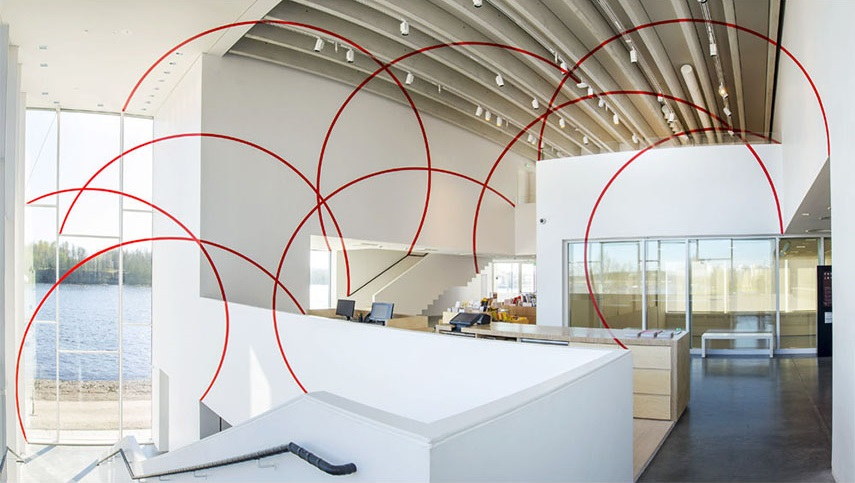 The representations of Varini's works are simple shapes: circles, squares, triangles, or some combination of the mentioned. However, it's not the shapes themselves that form the complexity of his large paintings but their realization in the eye of the viewer. Designating a specific vantage point, the artist plays with the perception of the one standing at that exact spot and the painted pieces that are abstract individually come together to form an image. Looking almost as if morphing the very structure of the area, his works create an illusion of depth that makes the air itself seem as a giant canvas. However, missing the given spot doesn't mean missing out on the art of the piece. Concerned even more with what happens outside of the vantage point, Varini offers endless viewpoints as the piece meets the surface of the space, giving the viewers a chance for infinite unique interactions. Varini is fascinated by architecture as a backdrop for his pieces and he always seeks for the unusual, new spaces which contain varying planes of depth. Thanks to this variety of planes, Varini's murals or installations can grow to be quite dramatic and strongly engaging.

Designating a specific vantage point, Varini creates an optical illusion for the viewers to spot and , if standing at the exact spot

The pavilion Paul Delouvrier is one of the best places to experience Varini's installations. It is also the third-largest park in Paris. Here, three of Varini's creations share such a limited space, which altogether leaves the impression that Varini exceeded even his own already enviable technical skills. The pavilion is a 1,000 sqm beautiful building made by a Catalan architect Oscar Tusquets in the early 90s. Nowadays, in the age of easy photo sharing, Varini's geometric style appears dynamic and even trendy. However, in person, his installations reveal their hidden side and it becomes clear that they are not entirely simplistic. Varini's geometric shapes dance and play, stretch or shrink, forming an appealing network of intertwined shadows. They also playfully intersect various window panes, creating a stained glass effect. La Villette En Suites is in fact not the first time that Varini has realized a multi-perspective work. However, this project was particularly challenging because it deals with the public space and Varini had to utterly dedicate himself to understanding and feeling this amazing architectural piece with all of its attributes as well as its shortcomings.

Uncanny by definition, the whole practice of the Swiss artist brims with suspense and a higher sense of things. Whether you're familiar with his principles or not, it's hard to escape the feeling of being a part of something bigger when viewing any of Felice Varini's paintings. Although you might miss the play between dimensions if you don't catch the intended image, the fragments of each individual work can be considered an artwork in itself, separate from the complete picture. With so many viewpoints attainable in regard to the piece as a whole, each of Varini's artworks provides an enticing complexity that easily pleases any eye.

Featured image: Felice Varini - image via zimbio.com.
All other photos courtesy of the artist.