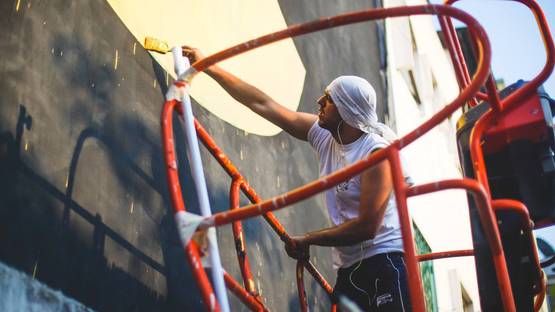 Coming from Greece, Fikos is an artist who's working predominantly in iconography and murals, and who understands the significance of the past. In areas that exist for as long as humanity (art being one of them), that significance is even greater. However, his vision of Greek contemporary painting being popular and recognized internationally is based on its evolution into a modern universal event rather than becoming a celebration of nostalgic accomplishments of the past.

Fikos has been very creative since he was still a child, and then, at the age of 13, he began studying Byzantine painting under watchful eyes of George Kordis, who is undoubtedly one of the most important representatives of the revival of the icon. The two of them also collaborated for a number of years, creating murals in Orthodox churches. During all that time, the young artist was learning from his teacher but was also developing his own unique style. With previous experience in graffiti, his transfer from ‘ordinary’ street art to creating large-scale murals came as a natural progression. Many public spaces have since been blessed with his works, whose value is magnificent, as it’s the first time that a modern movement such as creating murals have met something like the ancient and monumental technique. He still paints icons as well, and speaking of technique, they are created by using egg tempera on handmade Japanese paper which is glued onto wood. The murals are executed in acrylics, and their themes emanate from the ancient Greek mythology and Orthodox Christian tradition, with the accent being on the later. They are always related to the places where they are presented, rising above the level of the usual street art, and becoming something more. His work on the streets can be described as Muralism.

The themes for most of his works emanate from the Orthodox Christian tradition, and the related pieces are very popular

Monumental Achievement and the Evolution of Street Art

In June 2016, the artist was invited to Kiev to paint a mural for the Mural Social Club Festival, which is organized by NGO Sky Art Foundation and Dmytro Palienko, curated by Oleg Sosnov and Julia Ostrovska. Titled Earth and Sky, 46 meters in height, it became the world’s largest mural in the history of Byzantine Painting and the highest artwork in the history of Greek art since ancient years. It took the artist 13 days to complete the artwork. The greatest commendations came from the people who live nearby, as they said that it looks as it was always there. The artist considers it to be the best comment he can receive because it proves the natural way of the birth of the mural, and the harmony between the piece and its surrounding environment.

It took him 13 days to complete this project

An Old Technique in a New World

The term Contemporary Byzantine Painting was conceived by the artist, with its meaning being embodied in the painting that originates in the old tradition and in combination with modern painting movements offers a new style in our time. Photios Kontoglou was responsible for the renaissance of this particular style, being the first to present a complete and mature proposal for the non-religious version of this kind of work, but also because he practically proved the breadth of the spectrum of possibilities of this form of work in regard to the stylistic variety that it can provide. Today, in the field of iconography, the practice of copying old prototypes is stronger than ever. However, there are a few individuals, Fikos among them, who are creating works based on the Byzantine tradition with a spirit of renewal. As the artist states: "…in a world where art is suffering from the sickness or “originalism” and of “self-expression”, Byzantine painting may constitute an exceptionally functional universal painting language, able to accept painting idioms and dialects, and consequently offering freedom of expression to the artist and understandability to the viewers."

Fikos lives and works in Athens.

Featured image: Fikos working on a mural for Bukruk Urban Arts Festival, photo credits Aline Deschamps
All other images courtesy of the artist