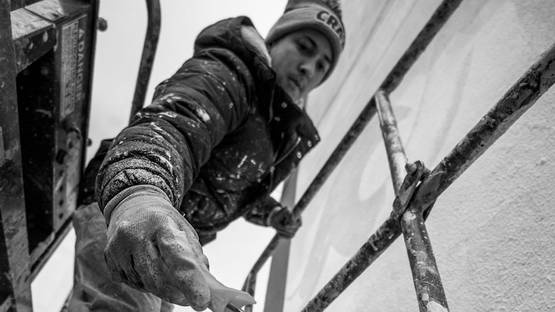 Raphael Sagarra ‐ Finok ‐ was born in 1985. Over the past decade, Finok has established himself as one of the most prolific young names on the streets of the megacity that is the epicenter of South American graffiti culture. It’s a city whose artists tend to maintain a tradition of picking a color scheme for their street work and sticking to it: Finok's is green, yet in his rapidly developing studio practice, he expands from it to a full color palette. He fills his large‐ scale canvases with many of the tropes that have come to exemplify São Paulo. These range from densely patterned backgrounds, folkloric characters, and touches from contemporary urban Brazilian life, like kite flying, fire balloons, and the graffiti genre endemic to São Paulo and other Brazilian cities.

These tropes were all familiar to Finok from childhood. He did the things that every Brazilian boy does, playing soccer and flying kites, but his neighborhood offered alternatives. "My family moved to a set of buildings in the neighborhood of Cambuci," he explains. "I owe much of my life that place. There I learned many things. I played soccer, flew kites, and started doing graffiti there. I saw firsthand the right and wrong way. I think if it was not for that place, I might not look at the world the way I see it today. I have great friends there to this day."

By the late 1990s, Cambuci had become the epicenter of South American graffiti. "When I was little I remember seeing some artists painting my neighborhood," he recalls. "But I guess it did not come to awaken my curiosity about graffiti. I was more curious when one day I saw boys painting a letter using only a little paint roller on a wall near my house. Then I started getting interested in graffiti. And then I started to value and realize that what the graffiti writers did was very difficult." Finok learned from them all, as well as from the artists from all over the city (and increasingly, the world) who were coming to paint in his working‐class neighborhood of Cambuci.

Like graffiti, Brazilian kite flying has a playful side as well as one not so gentle. "Initially flying kites is just a pastime," Finok explains, "but kite flyers here coat the long strings with milled glass powder so they can cut off the kite of another flyer... When I put the kites in my work, I go beyond more than just a pastime. I believe it’s different from playing soccer, where the loser of the game can in 5 minutes keep on playing. But with kite flying, if I cut your kite down, you lose the kite, you don’t have anything to play with any more. Game over. It’s a preparation for what comes in your adult life." At the same time, Finok is careful to note, they reflect the human creative impulse. "All of these are elements and objects that were part of many lives, but many people also thought were just games. Things that were done by people were done who believed they could be very good at what they were doing and were able to see who could go further in life."