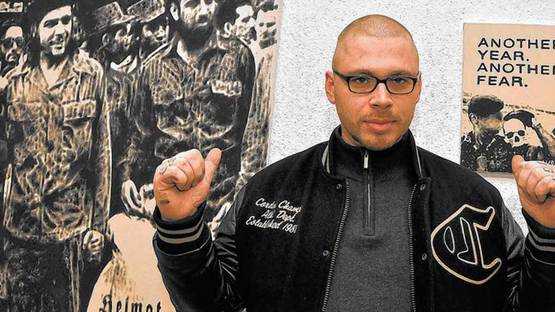 Florian Heinke is a well-known German painter. He uses black paint exclusively as a "radical medium" to lay the focus on emotion and the tension of everyday media and art production.

Henke was born in Frankfurt in 1981. He studied from 2004 to 2005 at the Art Academy in Mainz with Friedemann Hahn. From 2005 to 2009 he continued his studies at the Städel School in Frankfurt under Christa Näher.

His subjects are derived from traditional and digital media sources and often combine text to create an aesthetic that suggests a polemic poster or advertisement. Heinke’s paintings are aggressive, political and nihilistic, and this unrestrained approach is intended to provoke the audience into an emotive reaction. Heinke’s confrontational strategy reveals a deep lying cynicism of the modern age and a nostalgic longing for an impossible world.

He rearranges iconographic symbols of pop culture and transforms their meanings towards apocalyptic, cynical or even morbid strength. The blank canvas in contrast to the black paint emphasizes a kind of insistence, which captivates the viewer’s attention according to the idea of black pop art.

Beyond that Heinke puts the spotlight on a general examination of the art market and its mechanisms. With a high degree of irony he stretches his role as an artist. What first seems to be as a big gesture of a marketing strategy is rather to be read in the context of intensive artistic discussions about valuation, autonomy and socio-political issues.

He lives and works in Frankfurt.