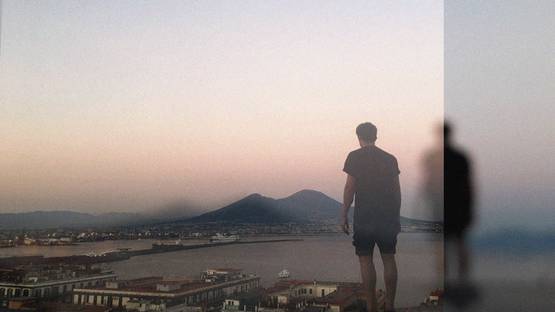 Francisco Bosoletti is a young Argentinian street artist, best known for his large-scale murals. Poetic and eclectic, his works show pictorial elements in which the figure of the human body and reflective floral component forcefully emerge and gain the upper hand on reality.

Born in 1988 in Armstrong, a small town in the interior of Argentina, Bosoletti started his artistic development as a child in art studios. In 2010, he graduated from Illustration and Graphic art school in the city of Rosario and started working in an advertising agency. His first glance at the career in art and an awareness that he could become a full-time artist was during his trip to Europe. He stayed in London for a few days, drawing and sketching everything he saw, usually on a piece of paper he had by his hands, such as envelopes and napkins. People started to come to him and ask if he would sell any of the artworks. Bosoletti then took a chance and realized he could make a living from his drawings, done in just a few minutes. After the return to his hometown, he joined the local street art scene.

Bosoletti has undertaken a unique artistic research whose aim is to oppose the all-pervading power of economic and financial speculation through a combination of both a provocative and rebellious attitude with a classicistic style. The symbol he has chosen for this battle is the tulip, the protagonist of one of the most incredible speculative intercontinental business operations. A poetic and elegant flower, in Bosoletti’s works the tulip mixes with human figures that as a result are transformed into totems, signals, arrows, and warnings whose aim is to preserve an idea of coherent humanity within the pictorial metaphor. Making use of vigorous brushes and an earth tone color, the artist works on a double creative track - from one side he explores the horizon of the feminine movement, characterized by iconic and ritual gestures that unleash a shamanic ritual directed by the omnipresent tulip, which fights and interacts with the energy lines of the painting. On the other side, Bosoletti sets on exploring the settings and scenarios hiding behind the surface of the wall, which he retrieves and brings back to light.

An example of Bosoletti’s work is the mural in the province of Santa Fe, Argentina. Just down the road from where the 26-year-old artist lives and works in Armstrong, Argentina, this wall is raising awareness toward environmental degradation due to modern urban development. Entitled as Guardián Anti-Urbe or Guardian of Anti-Urbanism, the character of a guardian in the piece appears to be watching over the green lot in front of him. Through this piece, Bosoletti is painting to the importance of nature - parks, squares, lawns, empty lots, gardens and streams in urban environments.

When not travelling the world creating art, Fran Bosoletti lives in his hometown, Armstrong.