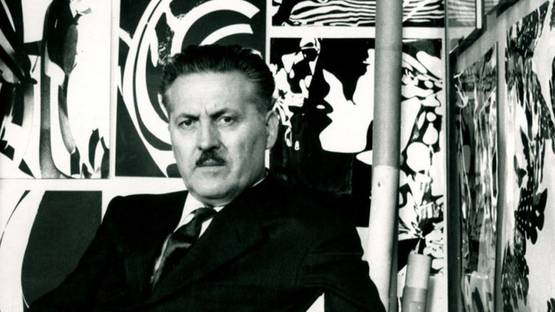 If you want something done, do it yourself. But sometimes, because of the circumstances, our identities mustn’t be revealed in the process. Similarly, the story of truth and lies hides behind one of the most recognizable logos in the world, the Woolmark logo, and its creator, Franco Grignani, an Italian artist who transformed the visual culture of his country and the whole world, without being transformed himself in the process. He achieved dynamics through various levels of integration, tension, rhythm, harmony, mathematics. Experimentation and the results of a conflict between external and internal forces, between dynamic and reference forces, has made his artworks recognizable and earned Grignani a title of one of the most influential Italian artists of the 20th century.

One of the Most Famous Italian Graphic Designers

He came from architecture but was known for his painting, photography and graphic design. In the 1930’s, he was already involved in and charmed by the Second Futurism, as geometric abstractions and the influence of constructivism started to be more than apparent in his works. Grignani became interested in visual optical and conducted analytical research through both pictorial and photographic. It wasn’t long before he started playing with perception as well, experimenting with photo montages, frames, drawings and overlays. The next stage of his artistic journey was the focus on bringing out emotions from the viewers through direct interventions on the image, distorting the plastically shaped using twist, rotation, warping and splits, or the dynamic, through progression, acceleration, and perspective reversals exchange. Aside from graphic design, where he already forged a name for himself, Grignani also started painting, where restrictions are non-existent and one can do what he truly wants, and that gave the artist an illusion of greater freedom.

The artist also painted, because the lack of restrictions gave him the illusion of greater freedom

Saroglia Who? The Truth Behind The Woolmark Logo

It was 1963, and the International Wool Secretariat (now Australian Wool Innovation) announced an international competition for a new visual design that will represent new standards of quality and help build a confidence in consumers. And Francesco Saroglia won the competition, but who was he? How it was possible that someone without any other known work and no exposure whatsoever won such a prestigious prize? There are a couple of stories behind, and both of them lead to Franco Grignani. According to the first, since other artworks were poor in quality and innovation, he made one himself, but as he was a part of the jury and couldn’t use his own name, he signed Saroglia’s name which sparked later controversy. The second story comes from one of Grignani’s daughters, who said that her father was contacted by Spiriti, an owner of an advertising agency, before the competition and asked to submit several sketches, which he did. Shortly after, the artist was invited to participate as a juror. His work that he previously submitted wasn’t under his name but actually won the whole thing. He even tried voting against such a decision as he was embarrassed. What really happened, no one knows for certain. The only sure thing is that the creator of the famous Woolmark logo was Franco Grignani.

From Architecture to Graphic Design

Grignani was born in Pieve Porto Morone, in the province of Pavia and studied architecture in Torino. He never actually did design anything architecturally speaking, nothing he was known for, at least. Instead, he turned to photography and painting, but what really made him a superstar of the Italian art scene was his work in graphic design. Soon he was famous outside of Italy as well. Since 1958, he had more than 50 solo exhibitions throughout Italy, Germany, Switzerland, Venezuela, and the USA. Grignani won the Palma d'Oro della Publicità in 1959 and the Gold Medal at the Milan Triennale. His artworks are included in several public collections, most notably the MOMA in New York, the Victoria and Albert Museum in London, the Stedelijk Museum in Amsterdam, and the Museum of Modern Art in Warsaw.

He was also famous outside of Italy

The Fundamental Power in the World

''To affirm its utility role visual communication services, graphic art must rely on a large number of experiments in order to achieve the perfect freedom, facing the routine daily activities.'' Grignani realized the significance of graphic art, as it represents a fundamental power in the world. People unconsciously receive messages while reading the newspapers or simply browsing the internet. It wasn’t all commercial for him, and he pushed the entire field forward through experimental work which often infringed the scientific areas of the physical and psychology.