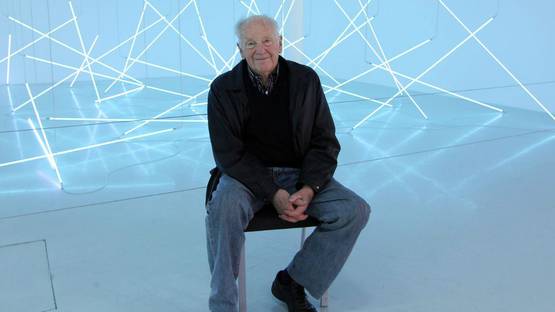 Widely recognized as a main representative of the Concrete art, Franҫois Morellet applied the rigorous rules of mathematics and geometry concepts into his work which classified him in frames of Minimal art too. He invented norms, sometimes absurd, giving his work the ability to build to infinity. His systems contributed to the demystification of the artwork, liberating it from subjectivity and emotion in creation. Starting his artistic career in the middle 40’s as a self-taught painter, Morellet portrayed realistic still-life subjects. During the 50’s, of the crucial importance of his work was the influence of the Neo-Plasticizm and Concrete-Constructivism. Abstract and geometric principles which were applied in the pieces of Piet Mondrian and Max Bill had a particular impact on the way in which Morellet saw the picture field as infinite structure spreading beyond the boundaries of the painting itself.

From Figurative to Abstraction

Morellet was born in 1926 in Cholet, France. Ten years later his family moved to Paris and he began painting at the age of 14. He took the lessons from Jean-Denis Maillart, who allowed him to exhibit one painting at the Salon of the National Society of Fine Arts. Graduating the Russian language at the School of Oriental Languages in Paris, painting remained his main interest. His first solo exhibition was held in March 1950 at the Creuze Gallery in Paris. Besides his artistic career, he was active in a family business, working in his father’s toy factory.

His early landscapes, portraits and still lifes were characteristic for their dark palette, but soon his style became distinguished from pictorial elements and by 1950 he considered himself as an abstract painter. Preoccupied with the configuring the picture field as infinite structure, Morellet discarded the all-over technique of Jackson Pollock, since his principles were established in advance. In the focus of his interests was the method rather than the finished painting.

During the 60’s he was a co-founder of an experimental group named the Research Group of Visual Art (BURN) with Horacio Garcia Rossi, Julio Le Parc, Joël Stein, Francisco Sobrino, and Jean-Pierre Yvaral. Their aim was to focus on the creation of installations using the non-traditional materials. Morellet completely threw out the function of the artistic sensibility which was associated with the strivings of Art Informel and Abstract Expressionism. Around this time, he began working with neon. His interest in optics and movement brought his work to the kinetic perception with the use of systems which combine logic and chance, juxtaposition, overlapping, interferences and fragmentation.

His combinations of multiple media and materials, as canvas, paintings, neon, building surfaces etc. were summed up in his work from 1992, Relache no1. Following some principles, Morellet allowed a chance to transform different materials into an aesthetic disorder. His oeuvre confirms the acceptance of the artwork “governed solely by chance and tricks”. Exploring the possibilities, he was primarily interested in the relationship between the creator and audience who perceived the work. Liberating the process of creation from any personal emotion, he expanded the realm of the viewer’s interpretation. Franҫois Morellet died on May 11, 2016, at the age on 90. His work has been exhibited in numerous solo and group exhibitions and it was included in many public collections.