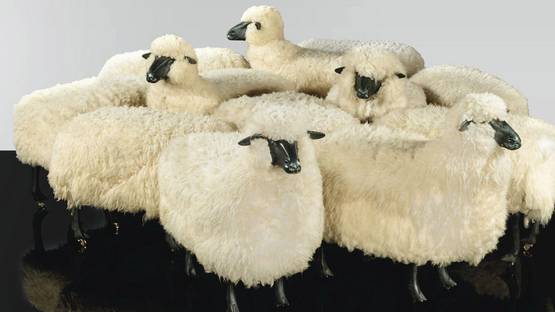 François-Xavier Lalanne was a French engraver and sculptor known for his outdoor works, referencing animals and the natural world, born in 1927. Of Jesuit upbringing, Lalanne studied drawing, sculpture, and painting at the Académie Julian in Paris, where he became greatly influenced by artists Constantin Brancusi, René Magritte, and Salvador Dalí. The artist took a studio in Montparnasse, next to Brancusi’s, and became acquainted with artists Max Ernst, Jean Tinguely, Man Ray, and Marcel Duchamp.

The young artist worked as an attendant at the Louvre, in the ancient Egyptian and Assyrian art departments, spending many hours studying ancient animal sculptures in the galleries. Lalanne also worked as a draftsman for the French-Hungarian architect André Sive. When Lalanne met his future wife, a French artist Claude Dupeux, born in 1924, at his first solo exhibition, they began a life-long collaboration. Together and individually, they created many Surrealist sculptures, often in the shape of animals.

Lalanne’s public sculptures are exhibited at the Third Street Promenade in Santa Monica, and at the Hôtel de Ville and Les Halles in Paris. His work has been exhibited at the Galeries Nationales du Grand Palais in Paris, the Museum Boymans in Rotterdam, and The Art Institute of Chicago, among other institutions. His work is in the public collections of the Fisher Landau Center for Art in New York, the Musée d’Art Moderne et d’Art Contemporain in Nice, and at the Fonds Régional d’Art Contemporain de Picardie in Amiens, France.