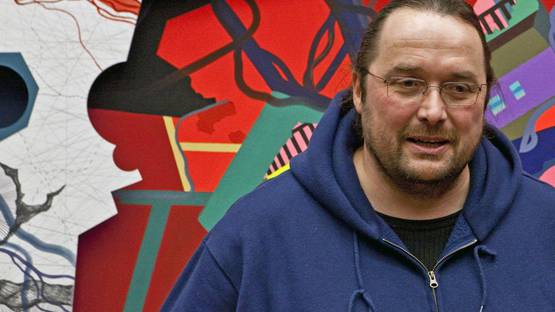 A German multimedia artist, Franz Ackermann is recognized for his monumental paintings, large-scale installations and numerous public commissions, in which he touches on the thematics of globalization, tourism and travel. His psychedelic works often portray interiors and architecture in a distinct disjointed, cartoony aesthetic.

Born in 1963 in the Bavarian Neumarkt-Sankt Veit, Ackermann currently lives and works in Berlin. He graduated from the Akademie der Bildenden Kunste in Munich and the Hochschule für bildende Künste Hamburg. He has shown work internationally in many exhibitions including the 2003 Venice Biennale, and at venues such as the Museum of Modern Art in New York City, Tate Liverpool, Pace le aloghy de Tokyo in Paris and the Stedelijk Museum in Amsterdam. His works are held in the collections of the Museum of Modern Art in New York and the Museum of Contemporary Art in Los Angeles, among others.

Ackermann creates works of saturated colors, featuring overlapping forms that merge with fragments of images taken directly from urban reality. These works expose hints of identifiable place, such as a street map, a building interior, a snippet of landscape, which are dislocated in a maze of organic generalizations. He is best known for his series Mental Maps, where he documented his perception of the great cities of Asia, South America and Australia.