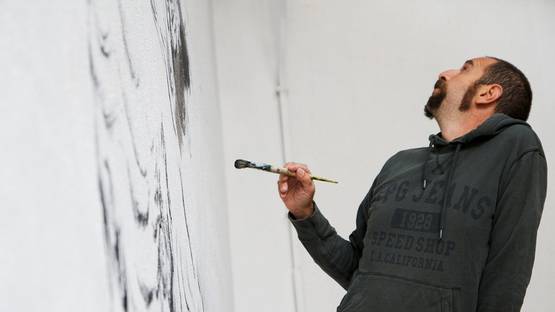 Fulvio Di Piazza is an Italian painter whose imagination runs wild in his paintings of extremely detailed imaginary landscapes. His peculiar artworks are depicting deep forests, hills, cliffs and fairytale villages filled with anthropomorphic faces and limbs, which are replacing branches of trees or architectural structures. Di Piazza is paying attention even to the smallest details, making his paintings almost horrifyingly crisp and rich in threatening, strongly saturated colors. His paintings are influenced by the work of economic theorist Jeremy Rifkin and his book Entropy (1980), which is addressing topics such as the waste of natural resources and the destruction of our civilization.

Di Piazza was born in Siracusa, Italy and he studied fine arts at Urbino Art Academy. His large oil paintings are a great example of horror vacui, the art term used to describe a specific manner of filling the entire painting with numberless details. This strategy works well for Di Piazza because the topic of surreal scenes requires an extraordinary amount of details, whose main source is the artist’s amazingly rich and playful inner world. Some of the most common motifs appearing in Di Piazza’s works are levitating human heads or animals, whirls of clouds, volcanoes or dangerously steep cliffs, slightly resembling the gothic feel of Tim Burton’s art. Another fact contributing to the ominous atmosphere is the palette Di Piazza is using, which consists of mainly dark colors. His audience and art critiques are often interpreting his artworks as dystopian and pessimistic.

The artist most famous series of paintings, called Ashes to Ashes, depicts threatening and wild volcanic landscapes. Clouds of smoke and soot are floating above the volcanoes while the human-like figures appear fragile against the numerous lava flows in the cruel world that looks like the aftermath of some natural disaster. Di Piazza’s excessive use of details, according to various art critiques, represents the contemporary model of communication, where the background noise becomes the message itself and it is challenging to discern what is crucial due to sensory overload. Our task is to hear the individual sounds that make up the entire noise of our world, just like we need to take some time to isolate all the components of Di Piazza’s elaborate work.

De Piazza’s fantastical landscapes have been shown in numerous galleries in Milan, New York, Los Angeles and London. Even though there is a certain amount of pessimism and darkness in his imagery, Di Piazza claims there is also a sense of hope beyond the dismal. He also emphasizes that ash is an ambiguous motif - it represents the remnants of burnt materials but also the beginning of a new cycle of creation. This interpretation is not related only to ashes, but also to more abstract terms, such as our entire world and hope for its transformation and renewal. According to Di Piazza, once our world has been demolished, it will certainly resurrect again, just like a mythological Phoenix.

The artist is represented by Jonathan Levine Gallery.

Featured image: Di Piazza in his studio - photo credit Alessandra Sicilia and Marcello Costa
All images courtesy of the artist.