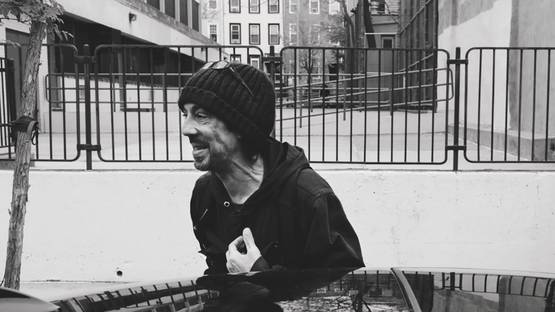 The living legend of the graffiti movement, illustrator, photographer, sculptor, fashion and graphic designer from New York City, Futura - also known as Futura 2000 – is one of the major players on the current international urban art scene. The contemporary of SAMO, Keith Haring, Richard Hambleton, Cope2 and many other iconic NY writers, Futura helped define the graffiti movement of the early 1970s by moving it away from lettering and towards the more painterly, abstract style. This highly influential and multi-faceted artist has, to date, remained unique, fresh, and evolving, and his characteristic style has paved the way for a whole new generation of high-profile urban artists.

Futura is the pseudonym of Lenny McGurr born in 1955 in New York. Growing up on 103rd Street in Brooklyn during the boom years of train bombing, McGurr was introduced to graffiti in the late ‘60s and early ‘70s while he was traveling to school. Inspired by his favorite movie 2001: A Space Odyssey from Kubrick and a book Future Shock written by the futurist Alvin Toffler, the young artist settled on the superhero pseudonym Futura 2000. He started to paint illegally on New York subway trains and city walls in the early seventies becoming widely known for his radically distinct approach to graffiti art. He introduced abstraction into a previously letter-based art form by covering whole cars of the city’s subway trains with his expressive paintings. Futura can be seen as the follower of some of the most prominent Abstract Expressionist ideas.

Growing up in the era of the civil rights movement, anti-war, and anti-draft protests had a great influence on Futura. In 1975, he joined the Navy and spent four years in Kenya, Pakistan, Australia, the Philippines, and all over Asia. When he came back to New York in the late 1970s, he realized that graffiti evolved and that street creatives were doing amazing artworks on the walls. Upon his return to the Big Apple, he met Keith Harring and Jean-Michel Basquiat and befriended with them. Futura emerged as the first artist who covered an entire wagon in abstract graffiti. Based on more graphic rules, in the beginning, his expressions developed into complex geometry, to achieve a more liberated form today, where a freer composition and colors are the base.

“When I first started making paintings in 1979-81, people were comparing me to Kandinsky and making references to other artists throughout art history whom I had never heard of!”

The Clash and The Escapades of Futura 2000

In the early 1980s, Futura began painting "legally" while he toured Europe with the punk band the Clash. He was painting banners for their stage show and taking an occasional cameo on the microphone. When the Clash went to New York in the 80’s they fell in love with the new culture of Hip-Hop that was emerging in lower-Manhattan’s art district and asked Futura to go on a tour with them and paint while they performed. The Clash’s song Overpowered by Funk from their fifth album Combat Rock features rapping vocals by Futura 2000. This collaboration didn’t end there, though. In 1983, Futura collaborated with Mike Jones of the Clash writing and singing the lyrics to The Escapades of Futura 2000, a track that articulated his artistic manifesto at the time, proclaiming: "I guess I must admire—the need to set things on fire". Futura has been active ever since, probing perceptions of public and private space, and blurring the line between street, commercial and fine art.

A signature figure throughout the artist’s oeuvre has been the Pointman, a robotic figure with an extended head, giving it the form of a Spaceship. Created in 1988, when Futura designed the cover art for the musical duo UNKLE’s debut album, Psyence Fiction, the Pointman has been one of the artist’s most recognizable motifs. With the success of the music album, came the success for the Pointman. Japanese toy manufacturer Medicom produced collectible toys. Bathing Ape, Nike and Levi’s were collaborators. The ventures gave Futura the opportunity to create his own brand: Futura Laboratories.

The Authority in Graffiti, Art, and Design

One of the founding fathers of street art, this widely recognized and multitalented artist is still very active. Highly respected by both his colleagues and art collectors, he has exhibited his works at such notable art spaces as the MoMA PS1 in New York, the Boymans Museum in Rotterdam, and the Gallery Du Jour in Paris. With a career that spans more than 45 years, he continues to create the cutting edge pieces which still seem fresh and influence young creatives throughout the globe.