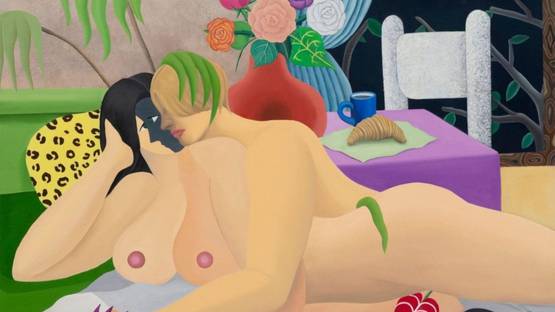 GaHee Park is a South Korean painter who often depicts romantic scenes where the idyll has turned sour, realized in the “naïve” style that recalls painters like Henri Rousseau.

Born in 1985 in Seoul, South Korea, Park currently lives and works in Montreal, Canada. She has earned BFA in Painting from Tyler School of Art, Philadelphia and MFA in Painting from Hunter College, New York. His work has been shown in numerous venues including Perrotin, New York and Seoul, Taymour Grahne, London, Motel, Brooklyn, 2nd Floor Gallery, Brooklyn, and Marginal Utility Gallery, Philadelphia.

Park's subjects, either solo or in embrace, are depicted in private and often erotic settings accompanied by animals and plants, all engaged with dismantling the separation between public and private space.The sexual acts that are transpiring in these works seem to be at odds with their quaint settings, where still life subjects such as bottles, cheeses, and rotund fruit appear on the verge of rolling off the surface of the table. In her work, the space is cancelled by flatness, only indicated by certain framed element that seems to replicate the scene. As she explained, she thinks "to some degree about liberating the female body from art history and society, expanding a point of view which we are unfamiliar about, and exploring ideas about pleasure."