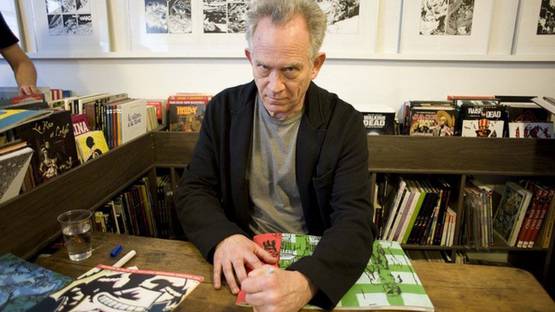 Gary Panter is an illustrator, painter, designer and part-time musician. His comics are fast and hard and drawn in an expressionistic manner. His works balance the worlds of painting, commercial art, illustration, cartoons, alternative comics, and music. Influenced by Frank Zappa's art director Cal Schenkel, Panter undertakes all of his projects with imaginative punk flair.

He was born 1950 in Oklahoma and raised in Texas. He studied painting at the East Texas State University and moved to Los Angeles in 1977. In L.A. he worked on multiple fronts, including painting, design, comics, and commercial imagery, establishing a pattern of creating across traditional boundaries, and in multiple media, that endures to this day. Today he teaches at School of Visual Arts in Manhattan.

In the late 1970s he exhibited his first major suite of paintings and drew posters and fliers for the likes of The Germs and The Screamers. He also began a long association with the various incarnations of Pee-wee Herman, as well as creating the early adventures of his punk/nuclear/hillbilly alter ego, Jimbo. In 1980 Gary published "The Rozz-Tox Manifesto", a highly influential document that directed his generation to infiltrate the mainstream with underground ideas and culture.

As an illustrator, Panter was one of the first to stop worrying about graphic perfection, preferring instead to push the underground punk attitude he had nurtured since the ’70s into his commercial art for established magazines such as Time, Rolling Stone, Entertainment Weekly and The New Yorker. By deliberately presenting his work with serrated edges instead of clean lines, Panter’s style came as a breath of fresh air to both publishers and audience alike. His fame as an illustrator grew when he was commissioned by Warner Brothers to produce a set of album sleeves for Frank Zappa. The resulting covers for Studio Tan, Sleep Dirt and Orchestral Favorites were universally admired as was his cover illustration for the debut album by the Red Hot Chili Peppers.

Gary's paintings occupy a large portion of a very prolific 1980s, during which he also designed the sets and puppets for Pee-wee's Playhouse, and maintained an active comics output through his own mini-comics and his contributions to Raw magazine and other anthologies.

Returning to comics in the early 1990s, Gary drew seven issues of a Jimbo comic book. He then began delving into light shows, staging elaborate psychedelic performances in his studio space. More recently, he has collaborated with Joshua White, and the duo has mounted lightshows at the Hirschhorn Museum in Washington, D.C. and at New York’s Anthology Film Archives.

In 2006-2007, Gary was a featured artist in the touring exhibition, Masters of American Comics. His paintings and drawings have recently been exhibited at Dunn and Brown, Dallas and Clementine Gallery, New York. In 2008, Gary was the subject of a one-man show at the Aldrich Contemporary Art Museum.