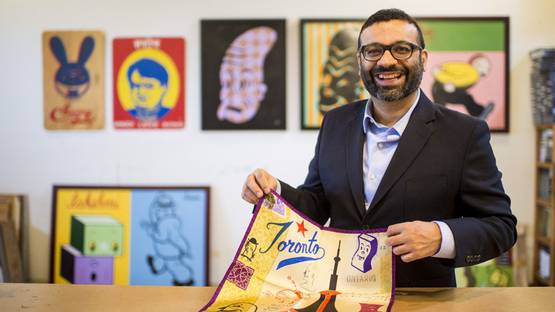 Gary Taxali was born in Chandigarh, India in 1968 and raised in Toronto, Canada. In 1991, Taxali graduated from Ontario College of Art and Design University (OCAD).

Gary Taxali is an award-winning illustrator whose work has appeared in many major magazines. He has exhibited in many galleries and museums throughout North America and Europe including The Jonathan LeVine Gallery. In 2005, he launched his first vinyl toy, The Toy Monkey, which included a special edition along with a silkscreen print commissioned by The Whitney Museum of American Art in New York City.

This led Gary to create his own toy company, Chump Toys, which eventually saw the release of his OH NO and OH OH vinyl figures. Aside from his gallery shows and illustration work, Gary also devotes a portion of his time teaching and lecturing at various arts organizations and schools such as OCAD University (Toronto, Canada), The Art Director’s Club of Houston (Houston, USA), Dankmarks Designskole (Copenhagen, Denmark) and Istituto Europeo Di Design (Rome, Italy).

Gary is a Founding Member of IPA (The Illustrators’ Partnership of America) and sits on the Stamp Advisory Committee for Canada Post.   Gary has also juried many student and professional competitions including The Juno’s (Screening Committee), The Society of Illustrators, The National Magazine Awards, The Dallas Society of Visual Communications and 3×3: The Magazine of Contemporary Illustration. Gary created the cover art and inside illustrations for Aimee Mann’s latest album @#%&*! Smilers, which won a 2009 Grammy Award Nomination for Best Package Design.

Last year, Taxali released his first children’s book entitled This Is Silly!, published by Scholastic Press. This past fall saw the release of his monographs entitled, I Love You, OK? published  by teNeues in Germany and Mono Taxali published by 27_9 in Italy.

In 2012, The Royal Canadian Mint released a special edition of six Gary Taxali 25¢ coins which, in addition to original art uniquely created for the coins, Taxali also did the typography using his font Chumply.  Each coin is stamped bearing his initials.

Gary lives and works in Toronto.