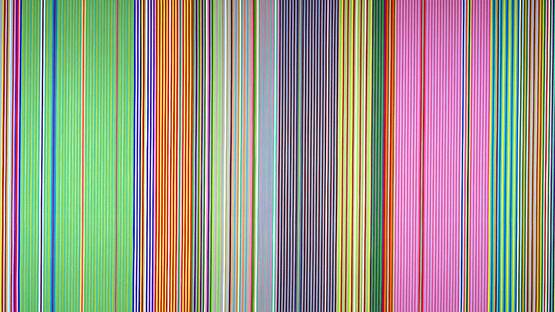 An American painter, Gene Davis was best known for painting lively compositions of thin, lively colored vertical stripes. He played a significant role in the color abstraction movement that first achieved prominence in the 1960s. His contribution was invaluable in establishing Washington, D.C., as a center of contemporary art.

Davis was born in 1920 in Washington, DC, where he spent nearly all his life there. Before turning to painting in 1949, he  worked as a sportswriter, covering the Washington Football Team and other local teams. Although never formally trained, he educated himself through assiduous visits to New York’s museums and galleries as well as to Washington’s art institutions, especially the Phillips Collection. He was also much influenced by his friend Jacob Kainen, an artist and art curator. His first solo exhibition of drawings took place at the Dupont Theater Gallery in 1952, and his first exhibition of paintings was at Catholic University in 1953.

Davis' early works are characterized by a distinct improvisational quality. In his later stripe paintings, which he is best known for, show the same preference for spontaneity when it comes to the selection of color. He often compared himself to a jazz musician who plays by ear, describing his approach to painting as ​"playing by eye."