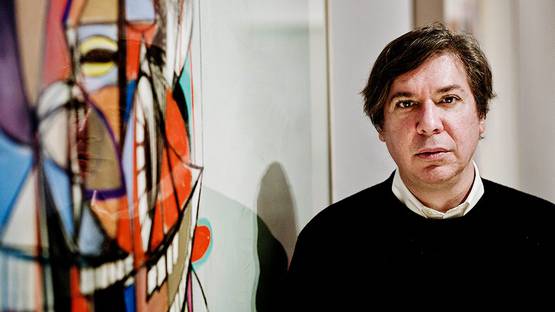 Regularly presenting us with a vast painted world populated with a cast of characters with deformed facial and bodily features, George Condo is a contemporary American artist best known for his signature brand of figuration which emphasizes fractured faces and aggressive imagery. In a career spanning more than three decades now, Condo’s highly distinctive body of work has consistently drawn upon art historical traditions and genres, especially the concept of portraits. Simultaneously, he was also mirroring contemporary social norms and referencing American culture of his time. By doing so, George was literally able to introduce Picasso-like techniques[1] to modern magazines, comics and cartoons. The results are characters with protruded eyes, bulbous cheeks and propagated limbs, all painted in a Cubistic-like method and located in a Pop new environment.

George Condo studied two subjects at the University of Massachusetts in Lowell, simultaneously focusing on Art History and Music Theory. During that time, he was studying guitar and composition while also dreaming of pursuing a career in painting. After two years spent in Lowell, Condo moved to Boston where he worked in a silkscreen shop - an experience that served him very well in future. He also joined a punk music band called The Girls, made up of young musicians with avant-garde views on both the music and the world. After a few small successes achieved with the band, George moved to the Ludlow Street in New York City, determined to get himself back on the course of becoming a full-time painter. He eventually emerged in the East Village art scene, noted for his characteristic concepts that were unlike anything else currently available. In this early stage of his career, Condo experimented with the concept he called Artificial Realism - the realistic representation of that which is artificial. This was supposed to describe his hybridization of traditional Old Master painting techniques with a sensibility of American Pop art. As he was still establishing his reputation and style, George continued to work in the silkscreen production studio, often collaborating with the legendary Andy Warhol. After he succeeded to hit it big, Condo moved to Cologne, Germany, where he met and worked with several new local artists from the famous Mulheimer Freiheit group[2]. This will eventually prove to be one of the pivotal periods of his career as Condo learned a lot about the concepts he used in his more mature pieces.

Between the years of 1985 and 1995, Condo lived and worked mostly in hotel rooms and rented studios between the cities of Paris and New York. In the meantime, he continued to exhibit extensively both in the United States and Europe. By this time, George was already famous for his unique and exciting portraits made up of the bizarre cast of archetypal characters that inhabit them. All of his subjects were classically posed and dramatically lit, as if they were compositionally stolen right from some catalog of traditional art. However, Condo also used such concepts in a way to combine them with the new contemporary cultures of the modern world, blending the most widely renowned methods in art history with comic books, Playboy magazine issues and Saturday morning cartoons[3]. In one of the most famous interpretations of George's aesthetics, Calvin Tomkins stated the following: Instead of borrowing images or styles, Condo used the language of his predecessors, their methods and techniques, and applied them to subjects they would never have painted. Another interesting observation was said by Laura Hoptman, the curator in the Department of Painting and sculpture at the Museum of Modern Art. She said that George: opened the door for artists to use the history of painting in a way that was not appropriation. Such fantastic achievements naturally led George to many recognitions. In the year of 2000, Condo was the subject of the documentary film Condo Painting, directed by John McNaughton. A year before the film, the artist was handed an Academy Award from the American Academy of Arts and Letters, which served as an overture for the Francis J. Greenburger Award George received in 2005. He also held numerous courses and lectures in his time, whilst his art was analyzed in various monographs. This made him into one of the most popular contemporary painters in the world, whilst his paintings and works were well attended and close followed wherever the gallery displaying them was - anywhere between New York and Paris. This popularity never truly stopped as Condo is prevalent in 2016 as ever. It should also be noted that Condo is well-known for book and album cover art - he provided the cover art for Jack Kerouac’s Book of Sketches and designed the album for Kanye West’s My Beautiful Dark Twisted Fantasy.

What impresses us the most about Condo's art is the daring nature of combining two very different spheres, out of which one is maybe the most iconic moment in modern art history 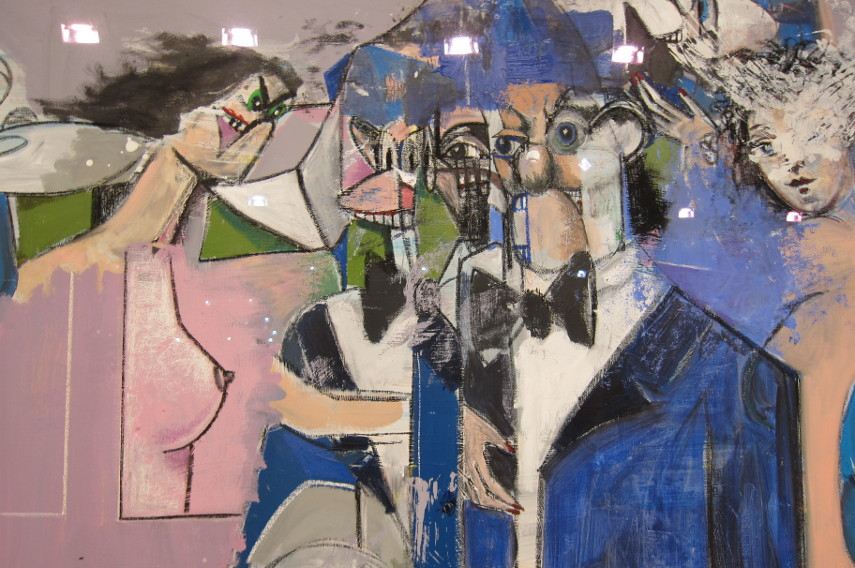 George Condo and His Unique Blend

Ultimately, what tends to strike the viewers the most when observing Condo's pieces is not their aesthetics - which are amazing, make no mistake - but the sheer daring nature they possess. Not many artists would have the courage and confidence to adopt the techniques of some of the greatest avant-garde masters of painting and adapt them to their own creative needs. Although George's attempts to combine two very different worlds may seem borderline insulting to some, blending such traditional imagery and techniques with contemporary themes actually helps us observe and analyze the development of avant-garde art. It is in this fact that the greatest value of Condo's work lies as it provides us with a natural outcome to the arts of Pablo Picasso, Diego Velázquez, Henri Matisse and Cy Twombly, allowing us to witness first hand the continuity of modern art history and new takes on the same courses within it.

George Condo lives and works in New York City, US.

Featured image: George Condo - Photo of the artist in London, 2014 - Image via Sarah Lee
All images used for illustrative purposes only.