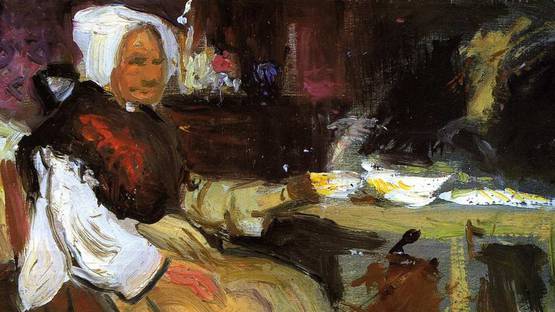 George Leslie Hunter was christened simply George Hunter, but he adopted the name Leslie in San Francisco and Leslie Hunter became his professional name. Showing an aptitude for drawing at an early age, he was largely self-taught, receiving only elementary painting lessons from a family acquaintance. A Scottish painter, he also spent fifteen formative years from the age of fifteen in the USA, mainly in California. He was later regarded as one of the four artists of the Scottish Colourists group of painters. Following his youth in California, he returned to Scotland, painting and drawing there and in Paris. Subsequently, he traveled widely in Europe, especially in the South of France, but also in the Netherlands, the Pas de Calais and Italy. Hunter painted a variety of still-lifes, landscapes and portraits, and his paintings are critically acclaimed for their treatment of light and the effects of light. They became popular with more progressive critics and collectors during his lifetime and have grown to command high prices since his death, becoming among the most popular in Scotland.