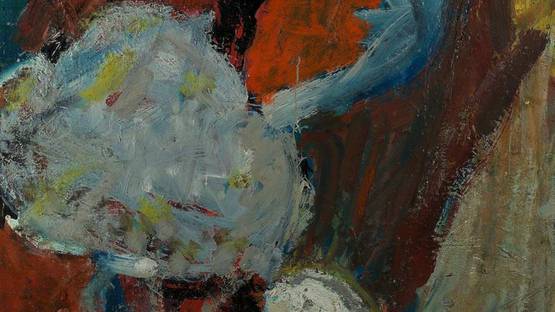 A prolific artist and member of the New York Abstract Expressionists, George McNeil created works that ranged from entirely abstract to loosely representational. Throughout his career, he commanded a mastery technique, capable of creating paintings of rich texture depth and color.

Born in Queens, New York in 1908, McNeil attended the Pratt Institute, which he left before gaining his degree. He then copied works at the Metropolitan Museum of Art and attended classes at the Art Students League, where he studied with Jan Matulka in 1931–32. From 1932 to 1936 he studied with Hans Hofmann, becoming Hofmann's monitor (assistant) and teaching a class in collage. In 1936 he became one of the founding members of the American Abstract Artists group, becoming one of the few abstract artists whose work was selected for the New York World's Fair in 1939.

McNeil's work evolved from early cubist-influenced compositions to full abstraction. In the early 1960s, he introduced figuration into his works, particularly in the Dancer and Bather series. He once explained: "I'm not a figure painter at all. I'm an abstract painter where I hope that bringing in the figure brings in certain human or psychological connotations or associations." His works from the 1980s were inspired by dynamic situations such as discos, New York City, football, street life or graffiti, reflecting in profound attention to color and complex abstract volumes.