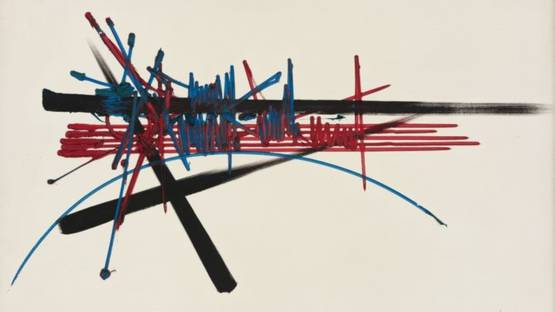 A French painter and theorist, Georges Mathieu is best known for large-scale paintings featuring curving, calligraphic lines. He is considered the founder of Lyrical Abstraction and the organizer of the “Abstraction Lyrique” exhibition held in Paris in 1947.

Born in 1921 in Boulogne-sur-Mer, France, Mathieu attended a variety of schools in Boulogne-sur-Mer and later in Lycée Hoche in Versailles. Thereafter, he studied English and law at the University of Lille. In 1942, he began making figurative paintings of England from postcards as a hobby. In 1944, he began his reflection on aesthetics held by the concept that painting does not need to represent to exist. Soon after, he executed his first non-figurative painting, Inception.

Mahieu's working process had a performative character, with the speed of his execution being a signature component of his style, which he once described as “an orgasm of uncontrolled expression.” In addition to Lyrical Abstraction, he is also associated with Tachism, a style understood as emotional, intuitive and highly spontaneous, emphasizing the gestural and performative aspects of the act of painting. Mathieu also claimed to be the first to practice “Tubism”—squeezing paint directly from the tube—and the drip technique, though the latter is widely attributed to Jackson Pollock.