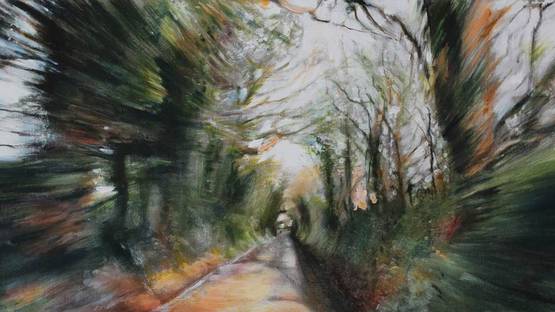 Georgia Peskett is a British painter and printmaker, who works in oil on linen and Intaglio printmaking. She was born in 1965, into a family of artists. Growing up, she was surrounded by bohemians and eccentric figures.

The artist is interested in the landscapes, both of the urban environment and the natural landscapes. She explores how humans exist within a landscape, presenting mundane and ordinary scenes from life in a dynamic and vibrant manner. The urban landscapes in her works are inspired by the places she visited, such as San Francisco, New York and London. Some of her series focus on the concepts of hope and superstition, the others on transient moments and female identity.

She went to Epsom School of Art and Design in Surrey. Following her higher Diploma, she became apprentice to her father Stanley Peskett and several other artists from New York.

Georgia's art is influenced by the artists such as Edward Hopper, Marlene Dumas and Peter Doig.

Peskett's works are featured in public and private collections in the United States, Australia, France, Switzerland, the United Kingdom, Hong Kong, Norway, Germany and Singapore, including the private collection of the Earl of Chichester and the one of Joe La Placa, Bentley Headquarters, British Telecom public collection, and Leeds City Council Collection. Her artwork was exhibited extensively in exhibitions and art fairs, in art centers such as London, San Francisco and New York.