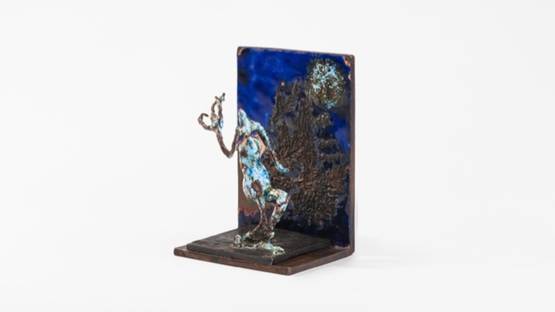 A celebrated French sculptor, Germaine Richier is best known for her large bronze sculptures inspired by themes in classical mythology.

Born in Grans, Bouches-du-Rhône, France, on September 16, 1902, Richier began her studies at the Ecole des Beaux Arts in Montpellier, in the atelier of Louis-Jacques Guigues. In 1926, she went to work with Antoine Bourdelle, remaining in his studio until his death in 1929, where she became acquainted with Alberto Giacometti. Her first solo show was held at the Galerie Max Kaganovitch in 1934. In 1937, she took part in an exhibition focusing on the work of European women at the Musée du Jeu and later showed in an exhibition at the World’s Fair alongside prominent Modern artists, including Marc Chagall, Georges Braque, and André Derain.

Richier's early work was fantastic, combining classical forms with human-animal hybrids and depicting creatures such as the spider and the hydra. Her style became less figurative after World War II; the bodily deformations which she favored as subjects were more accentuated in an attempt to convey a greater sense of anguish. Although she was trained classically, usually sculpting from a live model, and remained loyal to the traditional medium of bronze, the artist also experimented extensively in her work. Throughout her career, her works maintained levity, playfulness, and fantasy.