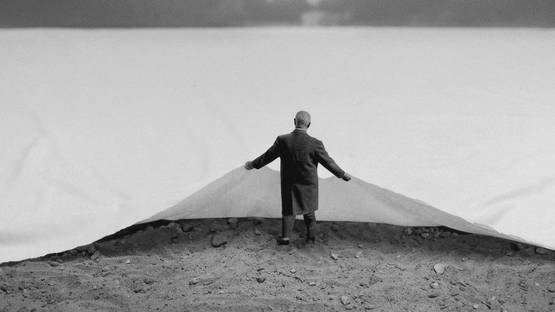 Gilbert Garcin is a French photographer known for his black-and-white photographs based on surrealistic metaphors and symbolism. Born in 1929, Garcin found his way of expression at the age of 65. Before, he was the owner of a lamp factory in the city of Marseilles.

The Rencontres internationales de la photographie d'Arles, an annual summer photography festival in Arles, was the event that changed Garcin's life. During one of the workshops, he met the photographer Pascal Dolesmieux who sparked his passion for photography by tutoring him in the trade. Aged 65, he retired and took up a trick photography workshop.

In his pieces, the artist is depicted as an typical “Mr. Everybody” in a cape who exposes visual puns and existential allegories within surrealist landscapes. His photographs and method are outrageously unique – his out-of-scale works are made only by cut and paste, without the aid of any digital technology. Garcin first takes a self-portrait, cuts out the resulting image, adds the element of self-portrait photography in a setting handmade from different kind of materials including cardboard and string, and photographs it again. By placing himself – and, not infrequently, his wife – in absurd and inextricable situations, he challenges the viewers to think about time, solitude and the weight of existence.

Aged 86, Garcin continues to make his extraordinary photographs without the use of Photoshop. He has published several books including Coffret G.G (2013), and Mister G. (2009).