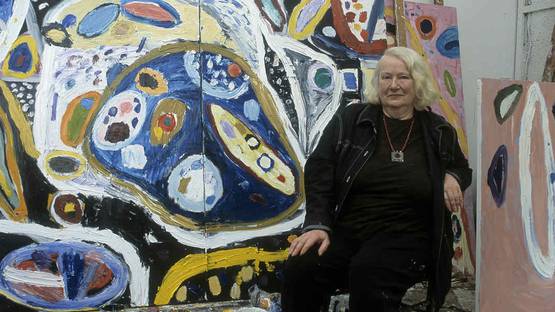 One of the first British painters to be influenced by American Abstract Expressionism and Color Field Painting, Gillian Ayres was the only female artist represented in the famous Situation exhibition held in RBA Galleries in London in 1960 that was a significant move away from the painting of St Ives School. Still, her freer tachist approach in the manner of Jackson Pollock’s drip techniques and working on the floor set her apart from her contemporaries who were closer to a stern hard-edge style. Beginning from the acrylic canvases imbued with muted tones of paint applied in multiple layers that form different textures, over the time, the artist shifted to oil, manipulated on an almost sculptural way where thick surfaces seemed to merge into each other. From the late 1970’s, her conspicuous lyrical abstraction made way to simple geometrical, more often square of circular forms.

Ayres was born on February 3, 1930, in Barnes, London. At the age of six, she started to attend progressive school in Roehampton and later the St Paul’s Girl’s School where she developed an interest in art and in accordance with that went to the Camberwell School of Art where she met her future husband, Henry Mundy. Before she started a teaching career during the 1960’s, the artist worked at the AIA Gallery in Soho for two years. From her first educational position at Bath Academy of Art in Corsham in 1959 and senior lecturer employment at Saint Martin’s School of Art in London to the head of painting at Winchester School of Art in 1978, Ayres finally decided to become a full-time painter, leaving other jobs in 1981 and moving first to the north-west Wales[1] and later to an old cottage at Morwenstow. The artist suffered a great lost when many of her paintings from the 1980’s were destroyed in the fire that engulfed the Momart warehouse in 2004.

Starting with the vinyl paint and a limited palette, Ayres’ later work experienced the shift to oil paint with the use of thick impasto and more colorful selection of tones. Interesting titles of her paintings, such as Midsummer Night (1990) or Anthony and Cleopatra (1982) have no references to the content but reflect the general atmosphere. Extracting words from her titles, one can capture the mood, also announced with the fascinating hues and tones of colors and inevitable movement and torsions of shapes. With no intention to overlap the paint every stroke and patch are strictly determined[2]. From her first solo show, held at Gallery One in London in 1956, the artist has exhibited in numerous British and international galleries. A solo exhibition at the Museum of Modern Art, Oxford in 1981 was followed by a retrospective exhibition at the Serpentine Gallery, London in 1983. In 1995, she had the solo show at the Tate Gallery, London, and at the Royal Academy of Arts, London, in 1997. In 2001, along with Jack Shireff, Ayres made prints that were published and distributed by Alan Christea Gallery in London.

Gillian Ayres as the Recipient of Numerous Recognitions

Among her numerous recognitions is the nomination for the Turner Prize in 1989, an appointment of Officer of the Order of the British Empire (OBE) in 1986 which was preceded by her election for a Royal Academician. Following the broadcast of a BBC Omnibus television documentary about the controversial Sensation show that represented the work of the young British artists and was hosted by the Academy, Ayres temporarily resigned as a protest against the unfair view of the older Academicians and the inclusion of the portrait of the killer Myra Hindley by Marcus Harvey. She was appointed Commander of the Order of the British Empire (CBE) in the 2011 Birthday Honors. Her work is a part of several prominent public collections including the Arts Council of Great Britain, the British Council, the British Museum, the Gulbenkian Foundation, Lisbon, the Museum of Modern Art, Brasilia, the Museum of Modern Art, New York, Tate, London, the Ulster Museum, Belfast, the Victoria and Albert Museum, London, the Walker Art Gallery, Liverpool, and the Yale Centre for British Art, New Haven, Connecticut, USA[3].

The painter lives and works in London and Cornwall.