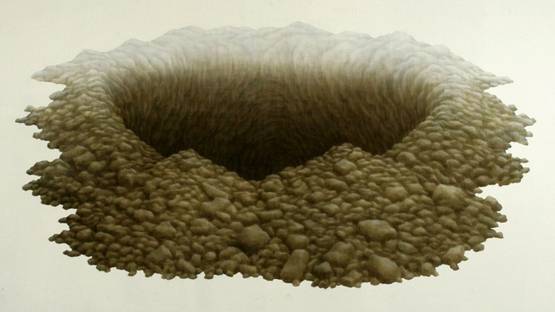 Gina Ruggeri is an American artist, born in 1970. She is known for her trompe l’oeil paintings on walls, which are a form of architectural intervention.

Trompe l'oeil is an art technique which creates the optical illusion. The depicted objects appear to be three-dimensional. Her artworks form a relationship to the walls of galleries and studios where they are created. They are eye-catching images of logs, stones, and smokes that disappear and emerge from the walls. Rugger views her work as the offspring of fresco painting, stage design, and minimalist sculpture.

In addition to participating in numerous exhibitions in the United States, Gina also held solo shows all over the country (and in Japan once), such as a solo exhibition at the Aldrich Contemporary Art Museum in Ridgefield, Connecticut in 2010, and a 2011 solo show at Nancy Margolis Gallery in New York. Her work is currently on view in a group show Prime Matter at the Drawing Museum in Laholm, Sweden. The show will be on view until January 10, 2016.

She has been teaching Drawing at Vassar College Art Department since 1996 and SUNY-Purchase.