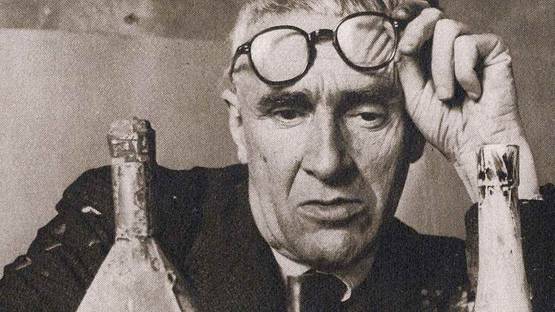 A 20th-century master of the painted still life, Italian painter and printmaker Giorgio Morandi built his distinguished reputation by painting subtle, tonal and simple depictions of everyday household objects. His oil paintings usually featured arrangements of vases and bowls, rendered in such a fashion that they have low levels of color saturation and subtle tonal variation, underlined by the artist’s understated paint handling. Heavily influenced by the Post-Impressionist style and early Cubist painters, Morandi developed a simple style that he maintained and stayed true to throughout his life, continuing to depict the same assortments of ceramic vessels in countless variations and arrangements, stubbornly refusing to surrender his visuals to the pressures of the avant-garde society.

Giorgio Morandi was born in the town of Bologna to Andrea Morandi and Maria Maccaferri - initially, he lived on Via Lame where his brother Giuseppe and his sister Anna were born. Later his family moved to Avesella where two additional sisters were born in 1900 and 1906. From 1907 to 1913, Morandi studied at the Accademia di Belle Arti di Bologna (Academy of Fine Arts of Bologna) where he learned many aspects of art making that served him well in the long run. Following the death of his father in 1909, Giorgio moved to via Fondazza and Morandi effectively became the head of the family[1]. During that time, Morandi taught himself to etch by studying books on Rembrandt. Although he lived his whole life in and around Bologna, Giorgio was massively influenced by the works of Paul Cezanne, Andre Derain and Pablo Picasso.

After a quick stint with the Futurist style in 1914, Morandi joined the army in 1915 but suffered a breakdown and was indefinitely discharged. During the time of the war, Morandi's still lifes became more reduced in their compositional elements and started to show a pureness in form. Soon after the World War I ended, Morandi was appointed instructor of drawing for elementary schools in Bologna - he held this post until the year of 1929. The Metaphysical painting or Pittura Metafisica phase in Morandi's work lasted from 1918 to 1922 and this was followed by what will prove to be his last major stylistic shift[3]. After it, Giorgio focused increasingly on subtle gradations of hue, tone and objects that were arranged in a unifying atmospheric haze[2] - this stylistic direction will be his choice of work for the rest of Morandi's life.

Although Morandi showed his paintings in the Novecento Italiano exhibitions of 1926 and 1929, he was more specifically associated with the regional Strapaese group. This fascist-influenced group was emphasizing local cultural traditions and were known to get quite radical when it came to their beliefs. Giorgio was sympathetic to the Fascist party in the 1920s but still had many friendships with anti-Fascist figures.[4] From 1928, Morandi participated in some of the famous Venice Biennale exhibitions, as well as in the Quadriennale in Rome and in different Italian and foreign cities.

Style of his Still Life and Landscape Work

The scattered palette, distinct lines and careful brushstroke of Morandi's still lifes are unmistakably modern in style. His work may be grounded in familiar and universal forms, but the way he painted suggest an autobiographical quality - his careful paint handling and attention to an identifiable Italian quality of light made his still life and landscape work truly stick out. Interestingly, he never stopped being completely engaged with his own pictorial experiments[5], even when the contemporary art movements of the avant-garde currents were overwhelmingly interested in abstract painting.

In 1948, Venice Biennale awarded Giorgio Morandi first prize for painting. He visited Paris for the first time in 1956 and, during the following year, he won the grand prize in São Paulo's Biennial. He held etching lections at the Accademia di Belle Arti until 1956. Quiet and polite both in his private and public life, Morandi was much talked about in Bologna for his enigmatic personality. He was a well-liked person in his town and was regarded as a local celebrity. Morandi died of lung cancer on the 18th of June 18 in 1964. He lived on Via Fondazza, in Bologna, with his three sisters Anna, Dina and Maria Teresa.

Giorgio is also an interesting artist to study from an entire art history standpoint - still lifes are one of the most conventional and everlasting subgenres of painting and by investigating and comparing Morandi's work to pieces that were made centuries or more ago, we get an interesting insight of how the authors from different eras tackled the same themes and sets of problems[6].

In many ways, Giorgio Morandi and his painting practice bridged the grand legacy of Italian art and radical changes of twentieth-century modernism

The Power of His Still Life Compositions

In more ways than one, Giorgio Morandi's work can be interpreted as a peaceful rejection of the turbulent and fast-paced modern world in which the artist lived, as well as an internal reflection on life itself. It can also be analyzed from a purely superficial aspect, as the following statement by the painter himself may imply: I believe that nothing can be more abstract, more unreal, than what we actually see. Regardless of the desired approach to interpreting his art, there is no denying that Morandi's painting of the unremarkable is a valuable element of the 20th-century modern art.

Featured image: Giorgio Morandi - Photo of the artist - Image via pinterest.com
All images used for illustrative purposes only.