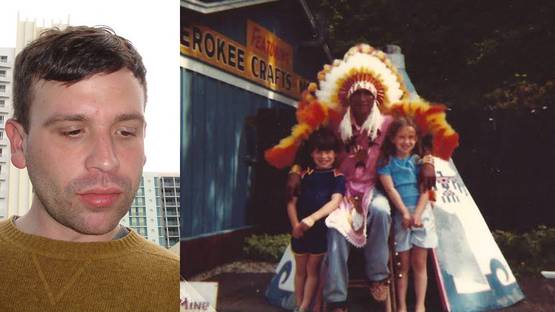 Greg Stimac in an American artist, born in Euclid, Ohio in 1976. From 1997 to 2002 he studied at Yuba Community College in Linda, California, where he practiced traditional darkroom processes. In Chicago he finished his undergraduate education at Columbia College, where he was from 2003 to 2005. He got a job there both at the Museum of Contemporary Photography and the Croatian Ethnic Institute. At Stanford University he studied from 2011 to 2013.

Greg Stimac explores the American ideologies found in mowing suburban lawns, campfires, snowmen, roadside memorials erected after automobile accidents, discarded urine-filled plastic bottles, and gunplay at unregulated outdoor firing ranges spread throughout the United States. Stimac first gained attention for his photographic series titled Recoil (2005), a project made in collaboration with gun enthusiasts. He began his exploration of recreational gun use during the summer of 2004 when he made repeated trips to unregulated rifle ranges in Missouri and California. Armed with a medium-format camera and a (thankfully) long cable release, Stimac would take a picture as his subjects opened fire. Sometimes catching the blur of bullets leaving the barrel or a momentary burst of light and smoke, Stimac’s Recoil pictures are remarkable for the relationships implied or suggested among the people in the frame. The shooters’ responses range from intense to casual, while their companions demonstrate anything from total absorption through mild curiosity to completely indifferent boredom. Influenced by such work as Hilla and Bernd Becher’s serial typography of disappearing industrial sites, Conceptual artist Greg Stimac set out to create a photographic series showing people throughout the United States mowing their lawns. From Midwestern suburbs to towns in Florida and Texas, Stimac traveled with his camera listening for the sound of mowers. The people in his photographs are a true cross section of U.S. culture, and the lawns themselves vary dramatically, from weed-ridden plots and brown patches of dry grass to verdant lawns surrounding pristine homes. Through its deliberate formal repetition, the series draws attention to the mundane labor required to maintain a lawn while at the same time addressing the ritualistic aspects of the effort. In the end, the scope and variety of Stimac’s survey underscore the predominance of the lawn as a social landscape. Greg Stimac also individually filmed three white Mustangs for both their iconic muscle car status and the idea (suggested by their name) of three white heroic horses. In each of the three-channel synchronized video projections, the car horn was held down and recorded until each burned out and died. The three horns start out sounding the same, then slowly each becomes individual and distinct, fading and dying at different rates. As aggressive and annoying as car horns can be, in this triptych the noise is quickly transformed and reduced to a meditative and lamenting chorus until the last garbled mutter. In 2009 Stimac collected ephemera on plexiglass plates attached to the grill of his car between destinations, then scanned them at road-side with a flatbed scanner. This work became a series loosely referred as Driving Photographs and served as a departure from his traditional photographic practice. Each individual image bears the point and destination as its title.

He how lives and works in California.