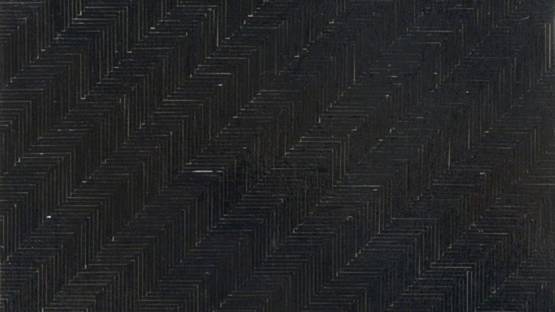 Gregor Hildebrandt is a German contemporary artist, whose main artistic mediums are cassette tape and vinyl records. The tapes are applied directly onto canvases and photographic prints and in room-sized installations.

Born 1974 in Bad Homburg, Germany, Gregor Hildebrandt graduated from Hochschule der Künste, Berlin in 2002, after he studied previously at the University of Mainz. Hildebrandt was awarded a Studienstiftung scholarship in 1998 and received a scholarship at the Deutsches Studienzentrum in Venice the following year, while still a student.

In his paintings, he adheres the coated side of cassette tapes onto a canvas, presses on it with a brush or roller, and rips the tape off to create the defined, yet sporadic lines on his works. He repeats the process before finally gluing them onto the canvas for good to create what he calls the negative painting. For sculptures, he shapes vinyl records into bowls, sometimes stacking them to create what the artist calls a ‘sonic wall made of pillars of records.’

Although Hildebrandt’s work makes formal reference to Minimalism, the addition of a great number of subjective and autobiographical citations actually deliberately repudiates this strategy. Gregor Hildebrandt makes great use of pre-recorded cassette tapes as material in his pictures and installations. For Hildebrandt, the cassette tape as artistic medium, especially in its original function of storage medium, fulfils an important function in that way that it enables the artist to add a further invisible, hidden dimension to his pictures, creating a layer of additional meaning. Playing with perception in this way is a major characteristic of his work - the picture is completed in the head of the viewer.

If the contemplation of his art incorporates the varied cosmos of Gregor Hildebrandt’s references to music, film, literature and, last but not least, art history, his works turn out to be complex montages, in which pictorial associations from different spheres combine and intertwine. Hildebrandt employs the material of his every-day environment without aesthetic or theoretical inhibition and playfully links aspects of conceptual art and minimal art with his personal life and experience of pop culture.

Gregor Hildebrandt is represented by Wentrup in Berlin, Grimm Gallery in Amsterdam, Almine Rech Gallery in Paris, Brussels and London and Emmanuel Perrotin in New York.

Currently, he lives in Berlin with fellow artist Alicja Kwade.