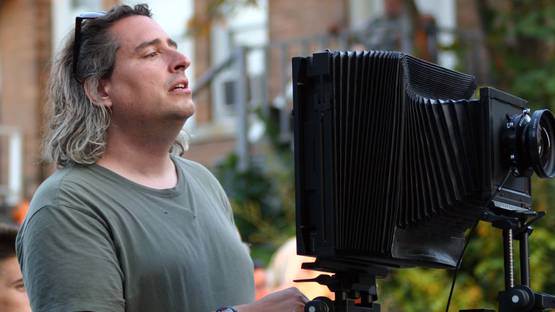 The peculiar photographic opus of Gregory Crewdson is inclined in the mysteries behind the porch or closed doors of idealized American suburban homes. Namely, the inhabitants of these homes are dealing with anxiety, manias, and are usually found in some rather bizarre situations. Similar to the illustrious and ephemeral motion pictures aesthetics, the photographs of Crewdson represent the other kind of reality. At the same time, his works are a cynical comment on the mythomania and common places of representation.

Gregory Crewdson was born in 1962, in Park Slope, a neighborhood in Brooklyn. He attended John Dewey High School, graduating early and as a teenager was part of a punk rock group called The Speedies. Interestingly, their hit song Let Me Take Your Foto anticipated what would Crewdson become later in life. Soon after, he received a BA from the State University of New York at Purchase in 1985 and an MFA in photography from Yale in 1988. Also, Gregory Crewdson has taught at Sarah Lawrence, Cooper Union, Vassar College and Yale University where he works as a professor at present.

Authentic approach to composition and light

The American Dream of Gregory Crewdson

Therefore, it is not surprising that Crewdson's bizarre photographs are usually taken in American small towns. The very choice of the theme seems to lay in the two presumptions. The first one is the picture of idealized home inherited from the consumerism, especially the mechanism of affluent society of the 50’s, and the other one being the critique of American babbitry. As a matter of fact, the artist is articulating states of loneliness, alienation, apathy, resignation, mystery, identity, desire, memory and imagination throughout the works of Gregory Crewdson. The dystopic landscapes are not narratives as such since they are just a fragments handed to the observer to solve them like a puzzle.

Melancholy, boredom and fatigue are among Crewdson's features

The photographs of Gregory Crewdson are elaborately staged and lit using crews familiar with motion picture production and lighting large scenes using motion picture film equipment and techniques. The artist carefully captures the moments of disconnect through the portraits of people lost in thought, isolated and inaccessible, both to each other and to the viewer. The final result is almost perfect – the colors are rather accentuated, the composition is balanced right. Exactly that contrast of technical perfection and highly dramatic atmosphere captured is the main quality of Crewdson’s work.

The Importance of Cinematic Experience

The influence of motion pictures in Crewdson’s work is notable, so the references to certain movies are present. The artist has cited that the films Vertigo, The Night of the Hunter, Close Encounters of the Third Kind, Blue Velvet, and Safe had the huge impact on him, while the atmosphere on the paintings of Edward Hopper, photographs of Diane Arbus, Cindy Sherman and surrealism moved him greatly. Perhaps, the most important influence can be traced in the work the great Italian director Federico Fellini who shot most of that film on the sets at Cinecittà studios in Rome. It is no coincidence that Crewdson, on his first overseas film shoot, shot the series Sanctuary at the very same location. Apparent fascination is also present in his photographs in the series Beneath the Roses which are a cynical American form of famous Fellini's film Dolce Vita.

One of his most famous series under this title is located in anonymous townscapes. The photographs depict strange situations of forest clearings, desolate streets and house interiors as sites of the enigma. On a stormy night, a man in a business suit stands beside his car, holding out a hand to the cleansing rain in apparent mystification, while a woman is sitting still next to her newborn in a house with open doors. The scenes are atmospheric and provoking and can be read differently. The coordinates of time and place are erased, so the post-catastrophic associations are inevitable.

The dark corners of the psyche

The Cathedral Of Pines

The latest series titled Cathedral of the Pines is named after a rural trail near Gregory Crewdson’s home in Massachusetts, a converted Methodist church and firehouse. The site where he found the inspiration to make these new pictures inspired him greatly with its lurk and dark atmosphere. The photographs are accompanied by an essay by Alexander Nemerov, who addresses the work in relation to the American past, focusing in particular on the way the images draw space and time down to ceremonial points.

The Domains of Photographic Practice of Gregory Crewdson

During the years, the artist has received numerous awards including the Skowhegan Medal for Photography, the National Endowment for the Arts Visual Artists Fellowship and the Aaron Siskind Fellowship. Crewdson has published several books of his photographs including Hover with ArtSpace Books, Dream of Life with the University of Salamanca, Spain, Twilight and Beneath the Roses with Abrams and a Retrospective book of his work, entitled Gregory Crewdson from 1985 to 2005. In 2012, he was the subject of the feature documentary film Gregory Crewdson: Brief Encounters. The whole opus of Gregory Crewdson is committed to examining The American middle-class nightmare through hyper-realist stylizations. Despite the works being reminiscent of cinema and even fashion editorials, their concise socially charged agenda makes them profoundly deep and of high artistic quality.

Gregory Crowdson lives and works in between New York and Massachusetts.

Featured image: Portrait of Gregory Crewdson on the set - image courtesy of Pinterest
All images used are for illustrative purposes only