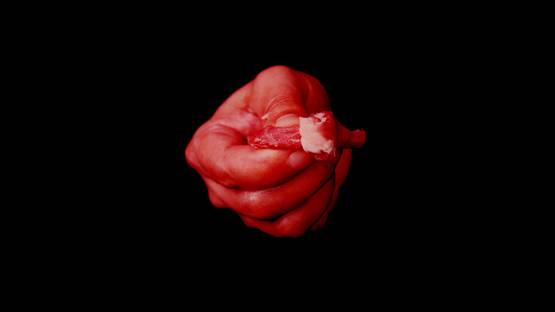 Gu Dexin, born in 1962, is a Chinese visual artist best known for his subversive installations that explore the concepts of decay and permanence. Since the 1980s, Gu has rejected the exploration of China’s socialist legacy that preoccupies many of his contemporaries, instead filling galleries with fruit or meat, which he would allow to rot in the gallery space.

His early installations, exhibited in the exhibitions China Avant-Garde, Beijing, 1989, and Les Magiciens de la Terre, Paris, 1989, were reminiscent of disembowelled human organs and excrement created by burning and twisting discarded plastic materials. In a 1995 installation in a Venetian palace, a sumptuous hall was transformed into a mortuary with red plastic beads covering the entire floor and bloody chunks of beef decaying in transparent coffins.

The choice of perishable materials, such as meat, flowers and fruits, reflects Gu Dexin’s deep-rooted pessimism towards human beliefs which he deems self-deceptive. Gu’s works bear no title or simply adopt the time of the exhibition as their designation in order to emphasize the ephemeral nature of the work. In the exhibition “Another Long March” held in Breda, Holland, he displayed apples, bananas and strawberries, chosen for their direct sexual implications, which were left to decay or to be consumed by visitors and birds in an open courtyard for two months. In the same exhibition he also displayed a glass box containing a meatball, dried and darkened after hours of manipulation, a gesture subsequently memorialized in a large size, close-up photograph.

In recent years, Gu Dexin has begun creating computer-generated figures with many breasts or genitals engaging in orgiastic acts. He has also begun producing short animated stories where human violence is mocked with an eerie humour.

For other works he installs arrangements of mass-produced plastic, as in the toy automobiles of 2004.05.09, 2004, its title reflective of his insistence to not impose meaning on to his works. Gu’s artistic output is extremely varied, he began his career producing surrealistic, figurative paintings, and in recent years has turned to animation and a quieter, less graphic mode of installation, exemplified by 2009-05-02, 2009, a peaceful, cemetery-like piece accompanied by accusatory texts like “WE KILLED HUMANS.” Gu ended his career upon completing this work.

Gu Dexin has had numerous gallery and museum exhibitions in his native country, as well as in France, Spain, Switzerland, Italy, Belgium, USA and UK, among others.