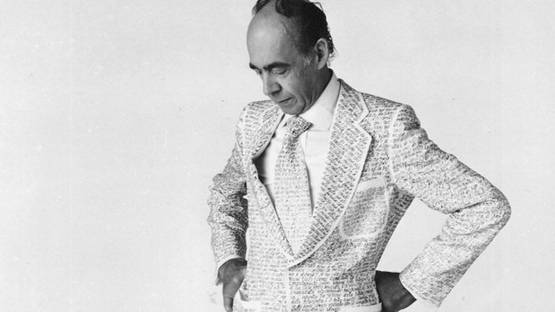 Guglielmo Achille Cavellini, also known as GAC, was an Italian artist and art collector, best known for his art of self-historification. Born in Brescia, Italy in 1914, Cavellini gave context to the Italian Experimentation period and was one of the first artists to link together post-war Italian art with American Pop Art. Apart from his early paintings and sculptures, the artist also remained known for his invented memoirs, imaginary art history texts, and fabricated correspondence with historical figures.

During the 1940s and 1950s, Cavellini became one of the major collectors of contemporary Italian abstract art, acquiring paintings from new emerging cutting-edge artists. This new interest of his was possible with the money derived from the family business – he possessed a successful chain of grocery stores in Italy, called 333. By 1962, Cavellini’s collection included works by Rothko, Rauschenberg, Vasarely, San Francis, Toby, Jean Dubuffet, Hans Hartung, Alberto Burri, Lucio Fontana, and many others.

In the early 1960s, Cavellini continued his activity as an artist, producing works spanning from neo-dada to performance art to mail art. At first, he created artworks in the manner of Dadaist movement, experimenting with various materials such as imprints of leaves, enamel, blotting paper, collages, toilet paper and razor blades.

In 1971, Guglielmo Cavellini coined the term autostoricizzazione (translated as self-historification), upon which he acted to create a deliberate popular history through self-promotion. Through a series of self-produced books, performances, portraits, novelty items, and voluminous correspondence, the artist’s art of self-historification was based on the idea that no one knew the artist better than himself.

During his career, Cavellini’s influence was present all over the international art community. He was renowned and celebrated in massive programs, exhibitions, and performance festivals throughout the world – in Japan, Belgium, Hungary, the United States, and elsewhere.

Until the end of his life, Guglielmo continued to produce self-portraits incorporating artworks of the past, connecting himself to the great artists who preceded and influenced him. His works are now represented by Wunderkammern Gallery, located in Rome.